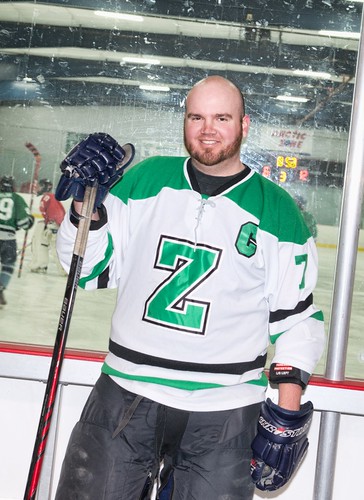 When Aaron Wallace returned to his Midwestern roots from the Arizona desert a few years ago, he rediscovered his lifelong passion of being around a sheet of ice and a bunch of hockey players.

Wallace – a native of Michigan and a collegiate player in Wisconsin – joined the coaching staff of the Zionsville High School club hockey team, the Artic Eagles, three years ago. In looking back, Wallace knew very little about his players and even less about the team’s goaltending coach.

“I didn’t really know anything about what was going on in Indiana,” said Wallace. “I knew we had a guy named Bob as our goalie coach.”

Eventually, Wallace learned a little about the diminutive, bespectacled coach. His last name was Kravitz as in Bob Kravitz. Yes, that Bob Kravitz, the former sports columnist for the Indianapolis Star and now current columnist/commentator for WTHR.

“I really had no idea who Bob Kravitz was,” Wallace admitted. “But then I put two-and-two together and realized he was the guy who everybody hated. He was kind of like a rock star.”

Thus, the Wallace-Kravitz partnership was formed. Wallace took over as the head coach of the Artic Eagles two seasons ago and the Wallace-Kravitz pairing helped propel Zionsville to the 3A state championship last March. Team Zionsville peeled out to a 21-3-2 start this season and are projected to again be among the favorites for a state title in March.

“This is the best team that I’ve coached,” assessed Wallace after his team finished 3-0-1 in a prestigious December tournament in South Bend. “We still have our core of players from last year and we have had some really, really nice players fill in.”

With six different high schools feed the Zionsville team many players have to travel for practice. A new leading player is freshman goaltender Logan Dickey, whose father journeys to the Westfield ice rink for practice from their home in Lebanon. A year ago, Dickey, 15, was playing youth hockey at the Indiana State Fairgrounds Coliseum. Now, he is facing wicked slap shots from potential future college players.

It is Kravitz who provides tudoring for his young netminder.

“Logan loves Bob,” said Eric Dickey of his son. “He listens to everything that Bob says. He has a lot of respect for him.”

And so does Wallace, who turns to Kravitz for tips on handling the minds of goaltenders.

“He gives me his honest opinion,” Wallace said. “Sometimes I can be quick to jump on goaltenders and Bob will me to calm down.”
Although his hockey skills are mostly unknown by Hoosiers, Kravitz confronted bullets to the five-hole several years before he collided with former Indianapolis Colts president Bill Polian. His hockey game in Indiana has been limited to the club team at Indiana University and the huffing and puffing adult leagues in Indianapolis. But as a high school junior, the now 54-year-old Kravitz was the starting goalie for the New Trier team that won the Illinois state championship.

“I threw up on the way to the rink,” recalled Kravitz on his confrontation with Homewood-Flossmoor at a suburban Chicago arena. “But during warm-up, the puck looked like a giant beach ball. The coach told me that he needed me and I was ready.”

Included on the playing resume was a dramatic stop on a three-on-zero breakaway for Homewood-Flossmoor. New Trier eventually won, 10-1, and Kravitz still laments a second rebound goal sacrificed at 1:08 left in the game. Yes, he remembered the exact time.

“It was my greatest thrill as an athlete,” he said. “I was a flopper and probably went down too quick. But I loved goaltending.”

And he now loves his duties for the Artic Eagles, including guiding Dickey, who has had to fast forward his playing career after senior Jack Sigman led Zionsville to the 2014 state championship. “He (Jack) played lights out for us,” remembered Kravitz. “He was a stone wall for us in the tournament.”

Wallace has noticed a coaching shift this season.

“I believe Bob tried to stay out of the way with Jack,” Wallace said. “He was kind of like saying ‘let’s go get them, Jack.’ But Bob has been able to really sink his teeth into helping Logan. It made him excited. We are lucky to have him.”

However, the writer turned coach downplays his additions to the team and player.

“It’s been fun watching Logan,” said Kravitz. “He didn’t always stay down on the puck but now he’s breaking that habit.

“I really don’t feel that I have that much to offer. I get more from the kids than I give them. I can be a sounding board. I really enjoy being here.”

And the Artic Eagles enjoy their high-flying status in high school club circles. Their accomplishments went a notch higher after the impressive showing in South Bend, which included one outdoor game. The tie was against a powerful Penn team, which could again be looming in state competition. Both Zionsville and Penn will learn their classification on Super Bowl Sunday, Feb. 1, when a hockey board assigns teams to different classes based on their regular season marks. Top tier teams play in 5A.

The Artic Eagles have speed in senior forward Max Warr and his brother Thomas, whom Wallace says “is the best sophomore player I’ve seen.” Seniors Danny Mateja and Kevin Anderson join the Warr brothers up front, while junior Chandler Horton anchors the defense.

Meanwhile, when state tourney arrives, Kravitz will step away from the computer and cameras and saddle up to Wallace on the team bench.

“I will be here as long as they have me,” he said.

Expect that to be a while, Coach Kravitz.

In the crease with Bob Kravitz:

Did you give a thought to playing college hockey with an NCAA team?
“Not really. I had a chance at a Division III team but I knew I was destined to be a journalist.”

Did you ever get into a fight while playing goaltender?
“Once. In New York, we were ahead, 8-0, and I wacked a guy who was in the crease. Both benches cleared.”

What do you like about hockey?
“I love the speed and the passion of the game.”

What are some of your favorite memories about hockey?
“The 1972 summer series between Russian and Canada. I remember watching it on a black and white television.”

Do you watch NHL games?
“Whenever I can. I like to watch the (Colorado) Avalanche games.”

Do you wish Indianapolis had an NHL franchise?
“I wish it every day. But it just wouldn’t work.”