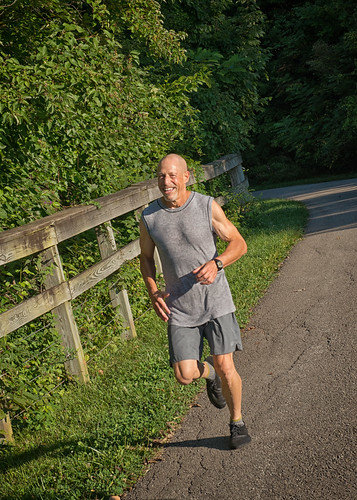 On any given morning, the Zionsville Rail Trail is buzzing with activity. Bikers, runners and walkers flood the pavement. Those who frequent the trail know the regulars, the ones who can be counted on to be out at the same time and with the same group of like-minded companions.

Budd Glassberg is a regular. His name may be unfamiliar to some, but his polished form, bubbly personality and cheerful countenance make him a legend on the trail.

He can be spotted from a distance running a fast clip with a stride that would make any coach proud. When he comes closer, his smile welcomes fellow runners. He greets strangers with a warmness typically reserved for close friends. At the age of 65, his vigor rivals those half his age.

Some refer to him as the “barefoot runner.” For years, he could be seen racing along the pavement without any footwear. Now he sports thin moccasins. On a trail where Nike-wearing runners dominate, his exposed feet command attention.

But Glassberg is not an attention-seeking man; he’s humble and thankful.

When he is asked about his smile, Glassberg responds, “Every time I run, I’m grateful. I’m grateful I can still run.”

Within the last several years, Glassberg has experienced difficult health challenges that made running impossible. At one point, he questioned whether he’d ever run again. For a man who twice ran 100 miles in a day and held the world record for a 10-mile run, the prospect of retiring from running was devastating.

Glassberg was diagnosed with prostate cancer 10 years ago. He was treated with proton radiation therapy. In 2013, he experienced some negative side effects from the radiation. During the course of the next year and a half, Glassberg underwent five surgeries and 12 procedures.

“I couldn’t run at all during that time,” Glassberg recounts. “It was difficult. I thought I would never be able to do anything again other than work.”

After much research, Glassberg contacted a California doctor who specialized in the surgery he needed. He underwent the procedure and spent the next three months recovering.

“The doctor said it was going to be difficult, and it was,” Glassberg admits.

Glassberg was told to slowly return to running. He smiles when he recalls his first run back after having a long running hiatus. “It was great,” Glassberg gushes.

When Glassberg was a young boy living in Chicago, he had trouble sitting still in the classroom. Glassberg’s first grade teacher recommended medication. Glassberg’s mother disagreed and decided to “tire her son out.” She had him run a mile route to and from school everyday. Glassberg recalls trying to outrun the bus to school. Later, he ran to Wrigley Field, about six miles from his home.

As an adult, Glassberg admits to still struggling with sitting. Running continues to be his energy release. Glassberg prefers “further over faster.” He’s competed in 13 ultramarathons and 50-60 marathons (including two Boston Marathons).

Glassberg hopes to pass on the love of running to others, especially to the next generation of runners: children. “Running is so much fun,” Glassberg proclaims. “I want others to experience it. I want to pass on the thrill of winning a race.”

Glassberg coached Zionsville High School and Zionsville Middle School cross-country teams for 15 years. He also started the Anti-Mini, a half marathon informal race held in Zionsville on the same day as the 500 Festival Mini-Marathon.

Glassberg feels a kinship with other runners.

“We’re all doing what most people consider a punishment,” Glassberg laughs.

“I always feel smarter and better at running after talking to Budd, ready to take on running and life’s challenges in new and innovative ways,” says Kinkaid.

For over 10 years, Glassberg led a running club for Eagle Elementary students during recess.

Maureen, Glassberg’s wife and a former Eagle Elementary school teacher, says that her husband’s upbeat personality and passion for running is contagious. She calls Glassberg a dynamic coach.

“Budd’s passion for running is so strong that he ignites everyone with it,” Maureen asserts.

Maureen says that her husband uses his running to better the community.

“He feels everybody has a responsibility to make life better for others,” Maureen adds. “This is his way to give to the community. This is his gift. He is inspiring.”