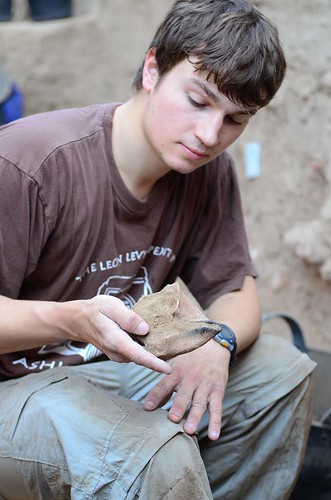 Chris Thompson’s favorite quote is “It’s not what you find. It’s what you find out.” These are the words he lived by while participating in a summer archeology expedition in Israel.

Thompson, a Zionsville native and recent Wheaton College graduate, spent much of the summer on the Leon Levy Expedition in Ashkelon, Israel. This is Thompson’s second time on the expedition. For six weeks, Thompson unearthed ancient artifacts in an area rich in history.

History of the Excavation Site

Ashkelon is the oldest and largest seaport in Israel. The city is situated on the Mediterranean coast about 35 miles south of Tel Aviv and eight miles north of the Gaza Strip.

Ashkelon is built upon the ruins of past civilizations and has been the site of numerous conflicts and constant upheavals. The city traces its roots back to 2900 B.C. A substantial Canaanite city began in Ashkelon in 1850 B.C., and its history spans into the Crusades (1200 A.D.). Ashkelon was largely abandoned after the 13th century until the new state of Israel rebuilt the city in 1948.

The Bible mentions Ashkelon several times. It is the location where Delilah cut Samson’s hair. Ashkelon is also the birthplace of Herod the Great. Richard the Lionheart, the King of England, likely lived in the city for over a year during the Crusades.

The Leon Levy Expedition digs in the heart of ancient Ashkelon at Ashkelon National Park. Since 1985, the archeologists have been excavating a tell, an archeology mound created by many generations of people living and rebuilding on the same spot within the park.

The expedition consists of faculty and students from several universities including Wheaton College, Harvard University, Boston College and Troy University.

Thompson explains that archeologists uncover items in reverse chronological order. Archeologists find items from the most recent history near the surface. As the archeologists continue to dig deeper, objects from more ancient history are discovered. Over the summer, Thompson and the team uncovered items from 604 B.C. when Babylonian King Nebuchadnezzar stormed and burned the city. 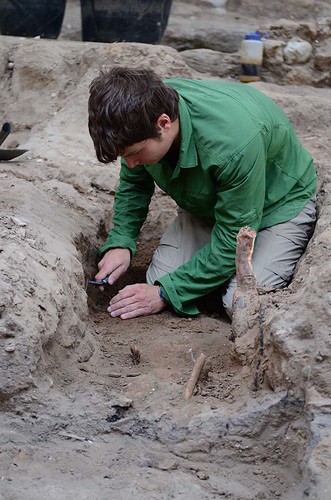 Life on the Dig
Thompson admits he was happy to wake up at 4:30 a.m. each morning to prepare for the dig. “I couldn’t wait to get up and do something I enjoy,” Thompson proclaims.

Six days a week, the team worked on the dig. The archeologists started excavating early to bypass the heat of day as temperatures in Ashkelon typically reached 95 to 100 degrees in the afternoon. The team began digging by 5:15 a.m. and stopped for lunch and afternoon rest around noon. At 4 p.m., the team returned to the site to wash pottery and examine morning finds. In the evening, a faculty member or guest lecturer provided a talk on the region’s history or other archeology topics.

Thompson says he entered each dig with few expectations of what he would discover within the soil.

“A lot of times when we are digging, we don’t know what we will find,” Thompson asserts.

Thompson discovered two scarabs, seals that served to officiate or seal ancient documents. He calls these finds significant because they can serve as chronological indicators.

Another important find was an ostrica (piece of pottery) that is frequently covered with writing. Thompson says these objects provide scientists with information about ancient inhabitants’ daily life.

Thompson has also unearthed arrowheads, coins, metal fishhooks and small jugs. “A day did not go by that I didn’t find something of interest,” Thompson recalls.

Dr. Daniel Master, Professor of Archeology at Wheaton College, declares, “Chris is extraordinarily talented in finding the clues that help us to unlock past human activities.”

The team stayed in a hotel in Ashkelon. Being close to the Gaza Strip had its challenges. The first day Thompson arrived in Ashkelon, the red dawn sirens blared (sirens provide only a 15 second warning of an imminent rocket attack). The rocket landed in an open area, and no damage was reported. A group sympathetic with ISIS claimed responsibility for the attack. Since then, the region remained calm. Last year, the dig had to shut down for security issues. 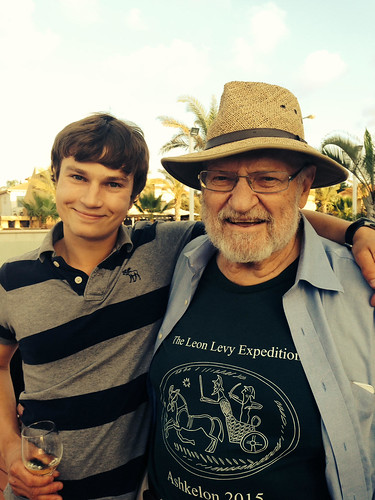 In 2011, Thompson graduated from University High School. He then earned a degree in geology and biblical archeology from Wheaton College in 2015. Thompson plans to take a year between college and graduate school to work in archeology. His future plans are to earn a doctorate degree and work in academia.

Sharon says, “Chris has been passionate about studying and discovering archeology for most of his life. It’s great to see his dreams come true.”