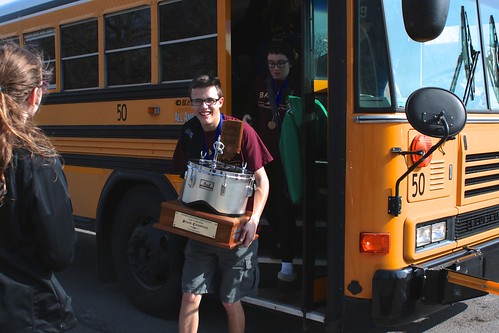 With cymbals crashing, mallets flying and drums resounding, Zionsville Community High School’s Indoor Percussion made history this year, finishing first in the state and 10th in the world in their division.

The state title came March 21 in Indianapolis where the group won the top score while competing against schools from around the state, including Carroll, Carmel and Greenfield-Central. “This is our program’s first state championship in anything,” said band director Tom Landrum. “It’s great to break through. It’s a big moment.”

Excitement over their victory barely had time to fade before the Indoor Percussion team returned to competition April 9 and 10 in Dayton, Ohio. There, for the first time, they performed at the Winter Guard International competition, finishing 10th in the Scholastic Class A category. They competed against high schools from around the country, including 31 other semifinalists from states as far away as Florida, Nevada and New Jersey.

Zionsville Indoor Percussion – also known as “ZIP” – has been around for less than 10 years. As the students themselves have admitted, it is not a well-known activity. Chris Hodgson of the Indiana Percussion Association explains it this way: “Indoor percussion is basically marching band inside. Instead of a football field, we use a basketball court. Instead of using a full wind section, color guard and percussion, we use only the marching percussion and the stationary percussion that’s up front.” The stationary percussion is sometimes called “the pit” and includes marimbas, xylophones, vibraphone, synthesizer and electric guitar and bass.

Orion Avery directs the percussion section of marching band and indoor percussion at the high school. In his words, “Indoor percussion is very theatrical. It has lots of pageantry. It’s a lot more than just drums in a gym.”

This year’s show was called “Balance.” Students wore sleek burgundy and gold costumes as they physically and musically communicated the idea of balance to the audience and judges. They performed moves such as playing while leaning to one side and standing on one foot. According to Avery, that was tricky to do while holding a 40-pound instrument and concentrating on accurate rhythms. At another point in the show, the bass drummers placed their instruments vertically on the floor and laid on them, feet in the air behind them; Avery said he first got that idea when he saw a kid try it a couple summers ago. To further highlight the theme, one student walked gracefully across an extra-long balance beam for the duration of the five minute show.

To demonstrate balance musically, senior Isaac Spillman said each member had to pay special attention to the dynamic range. “We shaped almost every note of our show through many crescendos and decrescendos. We wanted to show balance between the louds and softs and control those efficiently.”

Each year the group performs a new show. A professional composer writes original music, and a hired drill writer designs the paths of movement. Landrum and Avery work with other music department staff to develop the show into a complete, competitive production.

Unlike marching band which accepts all interested students, membership in ZIP is limited and requires an audition. There are 36 members this year. Even though there are no wind instruments, the xylophones, synthesizer, guitar and related elements add melodic lines and harmony. “Together they provide full-sounding music that is not just drums,” said Landrum.

Most students in ZIP said they love marching band but find indoor percussion to be “even more intense.” Spillman elaborated: “It’s a smaller group, so every individual is really important.” No one can hide. Every drum beat, body movement and facial expression can be noticed.

ZIP is an extracurricular activity. This year students practiced Tuesdays and Thursdays from 6-9 p.m. and Saturdays from 8 a.m. to 5 p.m., sometimes adding Friday rehearsals. During the school day, several ZIP members are in percussion class, but the class works on much more than ZIP music. Other ZIP members are in jazz or concert band, and some even play wind instruments in those ensembles.

ZIP members had to prepare physically. Early in the season, they spent 30-45 minutes of each rehearsal on general conditioning – running, sit-ups, push-ups and planks. They received dance-like instruction from choreographers on things like jazz runs and proper foot position. As lead snare drummer Makayla Cooper said, “One judge, after seeing our show, asked, ‘How many yoga classes did you have to put your kids through?’”

Director Avery knows the activity is demanding for the students, but he believes it is worth it. “My goal with anything I do is to encourage strong growth and self-discipline, whether that’s through practice, decorum or teamwork. I want each individual to strive for excellence for themselves and for the whole ensemble. Indoor percussion provides a good venue to do that.”

It has been life-changing for some of the students involved. Spillman, who specializes in keyboards, is planning to study music media production in college next year. “Without indoor percussion and marching band, I would not be planning to study music,” he said. “It inspired me. I can’t imagine high school without these two activities.”

Cooper agreed. “Every single person has put their blood, sweat and tears into this group,” she said. “Everyone has broken down, felt like their feet were on fire, gotten blisters – but it is so worth it. I want to continue with it beyond high school.”

The directors know that this year’s success has raised expectations and set a higher standard for the indoor percussion program. They also see benefits for the other music programs in Zionsville. “It’s like the entire music department is in this bowl, and we just keep adding more and more stuff to it. That elevates everything. Success in one area feeds the other areas,” said Avery.

Returning students look forward to having an opportunity to defend their title next year. The directors are also looking at the possibility of advancing to a higher division sometime in the future. Class A, in which Zionsville competed, is the largest class, but it is possible to compete at an Open or World Class level. These higher divisions are for elite groups who function as innovators for indoor percussion. Shows in these categories have involved feats such as doing flips off scaffolding and using remote control cars to play drums. “There’s almost no limit to what people are going to come up with,” explained Avery.

With the season behind them, students are able to look back and reflect. “Winning the state championship was all I could ask for as a senior,” said Spillman. “For me, it’s a culmination of the last four years of work, and not just my work, but the work of all the others who have participated and built these programs over the last four years.”