When the Zionsville school year comes to a close, David and Kara Benson will gather their three daughters and essential belongings. The family will pile into their vehicles and head west.

They will drive for four days, roughly 29 hours, to reach their destination: Glacier National Park. This Zionsville couple knows the route well; it’s the same trek they’ve traveled for the last 21 years.

During the school year, the Bensons are both local science educators. David is a biology professor at Marian University. Kara is a STEM (science, technology, engineering and math education) teacher at Boone Meadow Elementary School. Over the summers, the Bensons serve as park rangers at Glacier National Park. David and Kara job share one ranger position by splitting the five-day workweek evenly between the two. While one spouse works, the other spouse tends to their three daughters: Linnea (16 years old), Makenna (14) and Alia (8).

Introduction into the Park
The Bensons first landed at Glacier National Park when David was working on his Ph.D. at Washington State University. As part of his studies, David spent four summers conducting research on a bird species in the park. The last summer, the couple volunteered in the park by running family nature activities.

After David graduated, he was hired at Marian University. The couple moved to Indianapolis for his job and to live close to extended family.

But the Bensons longed to be back at Glacier National Park. David applied and was accepted to be a seasonal park ranger the summer after his first school year at Marian University. Kara tended to their new daughter while David worked in the park. The second summer, the couple equally divided the ranger position.

Ranger Life
David and Kara are interpretive park rangers. This means they focus on educating visitors about the park. The Bensons lead all-day hikes twice a week. The spouses alternate guiding 30-40 visitors on a 10-mile hike to Grinnell Glacier and another 10-mile hike to Iceberg Lake.

Diane Sine, Seasonal Interpretation Supervisor for the Many Glacier area, says having the Bensons job share a position has been helpful for scheduling. 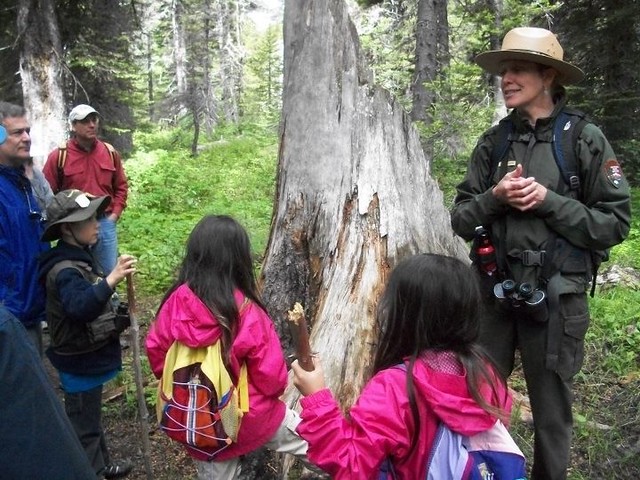 “I can schedule the ‘Benson’ position to lead the same 10-mile hike two days in a row where I might hesitate to ask other rangers to do that,” Sine says. “We have more flexibility in our schedule due to them both being equally talented at the job they share.”

The Bensons also conduct a hotel tour, boat tour and bird walk. Other duties include narrating a slideshow program and giving a campfire talk.

Sine says because the Bensons are educators, they bring those skills and experiences into their roles as park rangers.

“They understand their audience, whether they are communicating with children or Ph.D.’s,” Sine asserts. “They are able to connect visitors to the meanings of Glacier National Park.”

Kara compares her job to an evangelist. “I’m evangelizing to the public the love of national parks,” she says. “It’s not a hard sell. A lot of times, we’re preaching to the choir. They want to be there.”

The Bensons say park visitors routinely spot wildlife during their hikes, including bighorn sheep, mountain goats, moose, birds and golden eagles. Bear sightings are not uncommon within the park.

“I used to be more fearful of bears than I am now,” says Kara. “It’s part of the job to deal with bears. We hike smart. Sometimes a group of 40 people is more unpredictable than the bears.”

Living Conditions
In Glacier, the family lives in a valley within the park. Thirty to 40 park employees reside in the same area in apartments, quads and duplexes. A small two-bedroom apartment is the Benson’s summer home.

David and Kara admit a favorite part of being a park ranger is living and interacting with other staff. Kara calls the people they work with her closest friends.

“It’s a real community,” says Kara. “We have all these people helping to raise the kids. They have great role models here.” 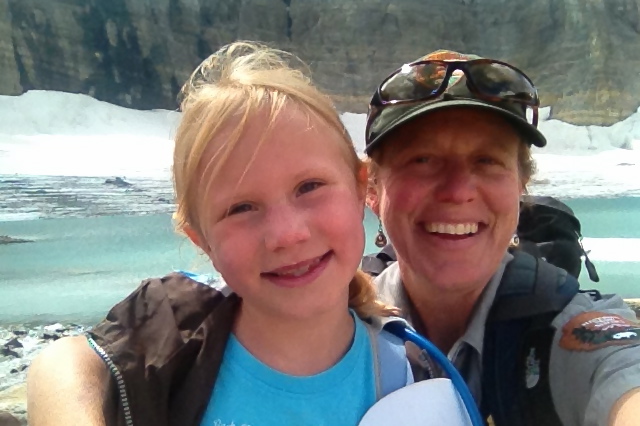 The Bensons smile as they recall the weekly community potluck dinner. Kara says those are her kids’ favorite nights. The group brings out food, lights a campfire and sings songs as a community.

Kara says the girls enjoy summers in the park. This summer, the two oldest Benson girls will work in the Glacier Park Boat Company and volunteer at the ranger station.

The Bensons hike and camp around the park on their days off.

“Every year, we look for new things and discover new things,” Kara says. “There are roughly 750 miles of hiking trails within the park, and we haven’t hiked them all.”

Bringing the Park Into the Classroom
The Bensons are frequently asked how they bring their summer park ranger experiences into their respective classrooms.

“I incorporate the park to the point where my students are sick of hearing about it,” David says. “I teach ecology and conservation biology, and so it goes hand in hand with the things I see in Glacier.”

David also conducts research while in Glacier National Park.
He is currently studying the impact of changing climate conditions on the ptarmigan, a bird found only in alpine areas.

Kara admits that because of the set curriculum, she doesn’t bring her Glacier experiences into the classroom as much as some would anticipate. But she says that her experiences always come in while studying concepts like life cycles, food chains, fossils or erosions.

Coming Home
The Bensons admit it takes a lot of effort to make their ranger positions fit into their lifestyle back home. The park needs seasonal rangers to work until Labor Day. Zionsville schools and Marian University resume classes before that time. 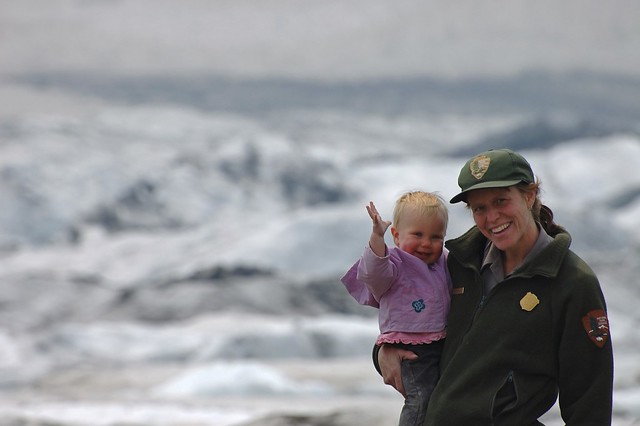 Kara arrives back to Zionsville in time for the teachers to return to their classrooms. David stays at Glacier National Park to finish out the season. He typically misses the first week and a half of classes at Marian University.

Kara refers to returning back home as “culture shock.”

Despite the challenges, the Bensons feel grateful to return each summer to their beloved park.

“We love this place,” says David. “It’s a spectacular place we get to know better than almost anyone else.”

“People say we have the best job in the world, and we agree,” says Kara. “I don’t begrudge the work because I love it.”