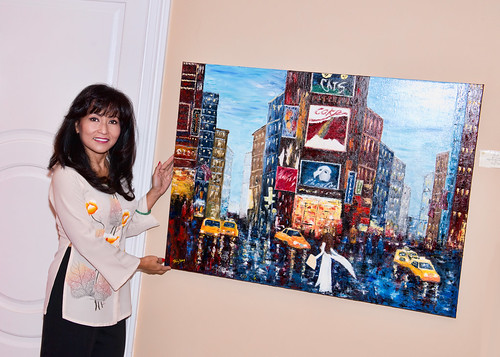 Walking into Thuy (pronounced Twee) Schelkopf’s Zionsville home is like strolling into an art gallery. The walls are adorned with a collection of acrylic and oil paintings. The pictures vary in size and subject matter, but the heart and history of the artist shines through each and every image.

But it’s a picture called “Lost,” which shows a Vietnamese woman standing in New York City’s Times Square, that gets Schelkopf choked up. It’s because this woman is familiar to her; Schelkopf is the woman.

Schelkopf’s background is fascinating. She spent her childhood in the midst of the Vietnam War. When South Vietnam fell, her family traveled from prosperity to poverty. In adulthood, she faced daunting health challenges. Where some would wallow in despair, Schelkopf maintains a positivity and optimism that can only be described as inspiring. She tells her stories with canvas and brush.

Schelkopf is the daughter of South Vietnam’s three-star general Quang Dang. He held the second highest military position in South Vietnam during the Vietnam War. Because of her father’s high rank, the family faced potential dangers. During the war, Schelkopf and her six siblings lived in a military compound in Saigon with other military officers’ families. Schelkopf describes the walled compound, roughly the size of Zionsville, as a “village.” Soldiers guarded the gates and heavily monitored visitors.

“There was always war and lots of fighting. It was a scary life,” Schelkopf states. “I thought the whole world was the same.” 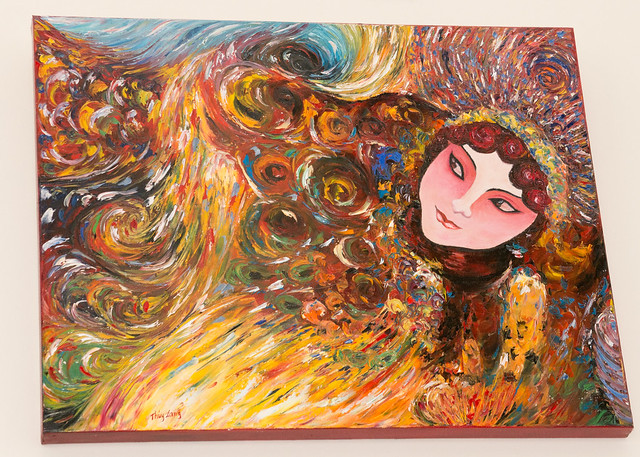 By early 1975, South Vietnam was in chaos and collapsing under attacks. Schelkopf’s father knew his family would be killed if the Communists took over the country, so he
sent Schelkopf and her siblings to Montreal, Canada, to stay with family friends. The siblings assumed the trip would span a few weeks, and so they only packed a bag filled with clothes.

Schelkopf’s father, mother and a brother serving in the military remained in South Vietnam. In April 1975, Saigon was buckling under attacks, and the Vietnam War was coming to an end. Schelkopf’s parents and brother fled the country.

Sang, Schelkopf’s brother, is in a well-known photo of the mass exit from Saigon. In the image, Sang is one of the occupants in the last helicopter leaving from the American Embassy in Saigon while a crowd of other Vietnamese are left on the ground.

Starting on April 29, 1975, Vietnamese refugees poured into Camp Pendleton in Southern California. Schelkopf’s parents and brother joined 50,000 other refugees at the camp. Schelkopf’s father only packed a briefcase with a little money and a Bible.

Life inside the camp was hard for him. He received death threats from other Vietnamese within the camp who felt he was responsible for the country’s loss. This, coupled with his desire to reunite with his children, led Schelkopf’s parents to leave the camp and travel to Canada, a decision Schelkopf calls “the biggest mistake of his life.”

Because Schelkopf’s parents lacked the necessary work and resident papers, finding employment was difficult. Dang, once a high-ranking military officer, was now working two or three minimum-wage jobs. Schelkopf and her siblings were also working to contribute to the family. Ultimately, Schelkopf attended beauty school, an education that fit within the family’s budget, and found employment within a salon.

“I grew up fast,” Schelkopf asserts. “I was cooking, cleaning and serving as ‘mom’ to my siblings. We were living day by day.”

Schelkopf says her father was depressed but remained faith-filled.

At the salon, Schelkopf met her husband Bruce; he was one of her clients. They are parents to daughter Jasminh.

In 2004, the family relocated to Zionsville. Bruce, a patent attorney, moved the family to Indianapolis for a job with Cummins. Currently, he works as the Group Senior Vice President and Chief IP Officer for the Swiss company ABB. 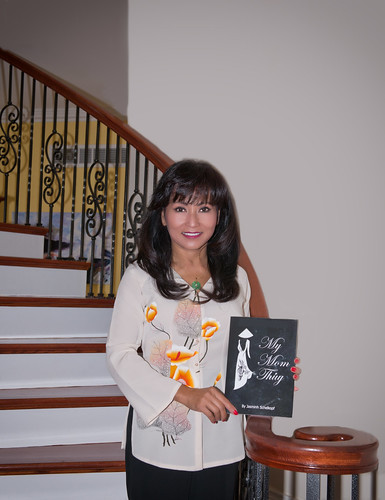 “She grew up in an environment where she had to be strong, had only a few years to be a child and was thrust into early responsibilities simply to help the family sustain an existence while she also lost the only home and country she ever knew,” Jasminh says. “I think that for many, that background would be difficult to handle and might leave a bitter taste about how unfair life is, but to my mom, it had just the opposite effect.”

Jasminh says her mother has maintained a “glass half-full approach,” even during the tough times, by always keeping sight on her dreams and never blaming others for her circumstances.

In adulthood, Schelkopf faced another challenge. Five years ago, she was diagnosed with lung cancer, despite the fact she never smoked. Schelkopf was fortunate to catch it early, and a lobectomy was able to remove the cancerous cells. She credits healthy and active living with her quick recovery and positive outlook.

Schelkopf started painting in Zionsville. She felt compelled to pick up a brush by her father’s encouraging words.

“My dad said I was an artist at heart,” Schelkopf says. “He said everything I touch, I do well.”

Schelkopf surfed the Internet for painting tips and attended a few classes. Oil is her art tool of choice, but she’s dabbled in acrylics too. To Schelkopf, painting is a means of relaxation and expression.

“I like to paint Vietnam,” Schelkopf says. “Every time I paint, it is from my heart. I name the paintings with how I feel about them.”

Schelkopf’s works are displayed at Cheveux Salon and Spa in downtown Zionsville. Her art can also be purchased via her website thuysbrush.com or at Thuysbrush on Etsy.