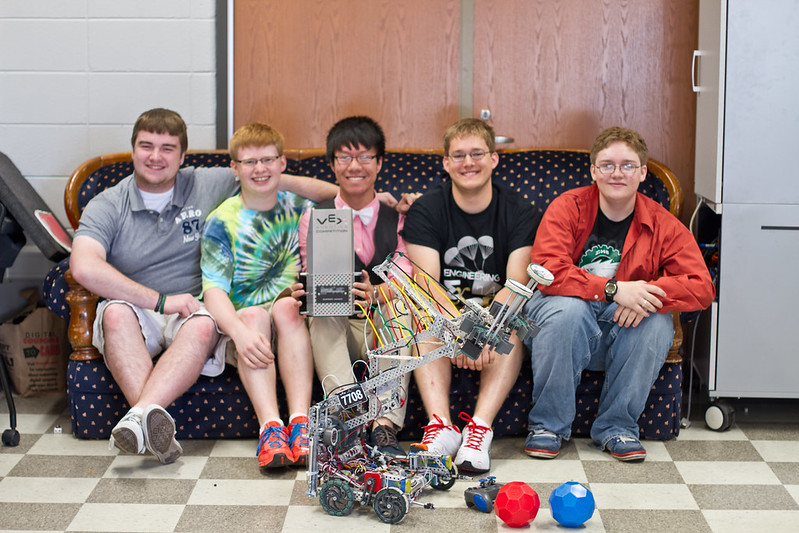 “They are world-class robotics kids,” says Zionsville High School science teacher Jenna Bowling. She is referring to seven students who form two teams that competed in the VEX Robotics World Championship this year. Team 7701 is Andrew Overhage, Sam Miles, Alan Fang, and Michael Wheeler. Team 7708 is Ryan Bing, Drew Bowling, and Alex Wang. Both teams flew to Anaheim, California, for a three-day tournament in April where their robots faced other robots from around the world. Both teams came home with victories, and Team 7701 won a divisional Design Award, one of only five awarded internationally.

Success at the world championship is the culmination of a year’s worth of effort. For Zionsville students, the process begins over summer break. That’s when experienced teams meet informally to discuss strategies, brainstorm ideas, and make sketches. As Alan Fang says, “Throughout the summer we think out the pros and cons of how we could build our robot. Our team uses CAD (computer-aided design) to build a virtual robot and formulate what parts we need and what metal needs to be cut. This allows us to save time building the real robot in the fall.” 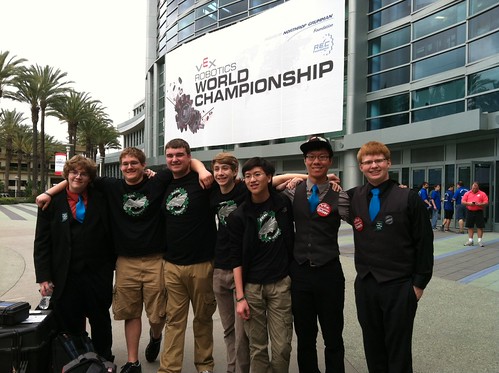 Each year the VEX robotics game changes, but it always involves scoring points by manipulating objects within a 12-foot by 12-foot field. This year the robots score points by placing a weighted beach ball and various smaller balls into certain zones on the field. Teams earn additional points if their robot can grab a 40-inch-high bar and hang from it. The team with the most points at the end of a two-minute match wins.

The robots compete by battling other robots on the field. “I like to pretend it’s a sport,” says Alex Wang with a grin. Each robot has to move offensively to score points and defensively to block the other team from scoring. Most of the time robots are operated by a designated student via remote control, but there are also brief periods of “autonomous” play when the robots perform on their own according to how the students have programmed them.

Designing a robot is a creative, open-ended activity. To keep competition fair, VEX sets a few standard rules. One of these relates to size: robots have to fit in an 18-inch cubical box. Teams buy an assortment of pieces from VEX, but there is neither a kit nor any instructions for making a robot. Students are free to imagine and design how their robot will look, work, and move.

“The first robot we build is never the last,” says Drew Bowling. “There’s a lot of trial and error. We design, build, completely take apart, re-design, re-build, and then refine for the rest of the year.”

As they compete against other teams at local tournaments in the fall and winter, they find out what is working and borrow ideas from other teams. As Andrew Overhage says, “It’s very dynamic. The game changes; how people play it…it’s never the same. There are innovations at each stage that change the whole thing.”

Because time and resources are limited, making multiple revisions is not easy. “You would think the natural test of a proposed idea would be to prototype it—just build one and see how it works,” says Drew. “But there are infinite possibilities of what you can do, and only three or four people and less than a year to work with.”

For most Zionsville students, the time they spend on robotics is entirely extra-curricular. (Robotics is offered as a class, but many students are not able to include it in their course schedules, and the class involves more than preparing for competition.) The robotics club is an after-school activity. Individual students usually unite with a couple friends to form a team within the club. Zionsville’s club, called the Steel Eagles, has 39 members who formed ten teams this year.

The club meets in a large corner room dedicated to robotics. It’s here that they build and experiment with their robots. Most of their experience, however, comes from competitions with other schools. Zionsville usually hosts a tournament each year, and students travel to a few other events. This year a state tournament was introduced.

“One of our teams (Team 7701) won the high school excellence award at the state tournament,” says Mrs. Bowling. “That’s the highest award that can be given at a tournament. Basically it means that their programming, design, performance at the tournament, and driver skills were all top-notch, ranking their combined skills above everyone else in the tournament.” 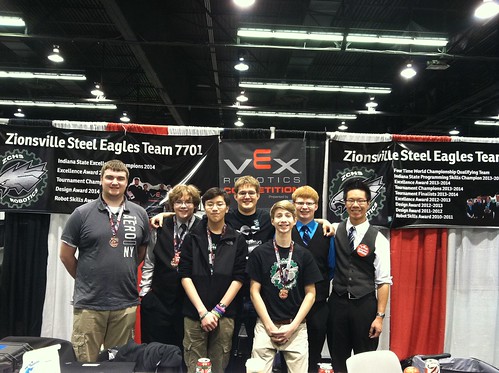 Team 7708 also achieved distinction at the state tournament. “They’ve won every type of trophy (as a team) that is offered by VEX,” says Mrs. Bowling. This year was their fourth trip to the world championship. “Their freshman year they qualified with driving skills, sophomore year with design, junior year with the excellence award, and this year they qualified with programming skills.”

Mrs. Bowling has multiple connections to the robotics program. She’s teaching the robotics class this year, is mother to Drew, and is one of four sponsors of the club. The others are Lori Bing (Ryan’s mother), Patrick Gentry, and Susan Talbert. All four teach within the science department at the high school. Bowling says their job is just to “keep things running,” and that “the kids are the amazing ones.”

“We’re not training them,” she says. “I tell them the end goal I want, let them know where they can find some documentation, and then I say, ‘Find a path.’ It’s neat to see their ideas go from brain to paper to physical object and then to see those objects move around.”

The kids seem to enjoy all aspects of the path, but they also find their own unique roles within their teams. For Team 7708, Drew likes to program and design, and his teammates say he has the best drawing skills. Ryan is the primary builder and “repairman.” Alex is the driver and also the “scout,” which is an important role at competitions.

In every match at a tournament, two robots compete against two other robots. That means each team has to form alliances with other teams. “At competitions I have to essentially go around and do public relations work with other teams that are either assigned to us or that we find to ally with,” says Alex. They have to sell themselves to other competitive teams while also finding a robot that would complement theirs in a match.

This aspect of the activity has led the students to an interesting discovery. They say the most challenging thing about robotics is not designing, building, or operating the robot. It is communication. “Whether it’s within your team or with other teams, communication is the hardest part,” says Sam Miles.

Sometimes their allies don’t even speak English. This year Team 7708 was assigned to compete with a team from South Korea. “Only their grandpa spoke English,” says Ryan, “so he had to translate everything. But he didn’t show up for the match, which made communication really difficult.” 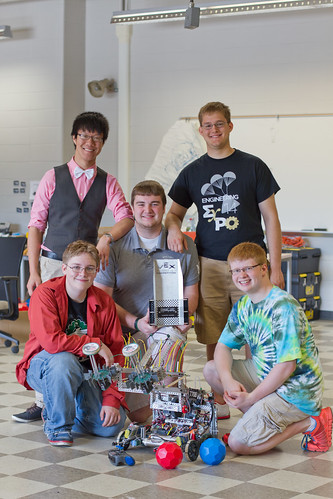 Teams also have to be able to communicate with judges. Team 7701’s ability to do that was part of the reason they won their division’s Design Award. The other part was recordkeeping. They have hundreds of pages of ideas, sketches, prototypes, and computer code from throughout the year. By compiling and presenting this information in a readable, organized— and very thick— binder, they were able to show the judges much of the work that had been going on in their heads and behind the scenes throughout the season.

For all seven students, their experience with robotics is influencing their future plans. Alan and Michael are sophomores, and Sam is a junior, so they plan to return to ZCHS next year. Andrew, Ryan, Drew, and Alex are graduating this month. Andrew plans to attend Rose-Hulman Institute of Technology to study electrical and mechanical engineering. Ryan and Drew plan to attend Purdue University, with Ryan focusing on materials science engineering and Drew on some form of engineering that uses robotics. Alex plans to study finance at New York University or University of Pennsylvania. He said that meeting people from all over the world and learning to partner with them at robotics championships has reinforced his interest in business.