Traders Point Christian Academy Having Faith for a Win

In 2006, Stevenson served as an assistant coach for the first ever football team at Fishers High School. He remembers the challenging hurdles involved in building a football team that featured no returning starters and very few players with high school experience. Stevenson also recalls the pains of suffering a 1-10 record that autumn.

“It can be humbling,” confessed the Hamilton Southeastern and Hanover College running back.

But Stevenson also assures there is one gigantic variation between building a football program at Fishers – a public school in the Hamilton Southeastern school district that rapidly expanded last decade – and creating one at a tiny, evangelical Christian school on the outskirts of Zionsville.

“We don’t have 2,000 kids walking in the hallways,” admitted Stevenson. “Obviously, we don’t have the resources that we had at Fishers. It has been challenging, especially in football. But it is exciting when you have the opportunity to see growth in building something.”

Certainly, it has been a rocky journey for Stevenson, head coach Kyle Johnson and the flock of Golden Eagles, now in their third year of competition. While Fishers notched a winning record (6-4) in Year Two and won a state championship just four years after the one-victory inaugural season, TPCA followed a 0-8 campaign in 2013 with a 0-9 audit last season. The Golden Eagles stumbled out of the blocks this season, losing 42-8 to the Indiana Deaf School in Week One. 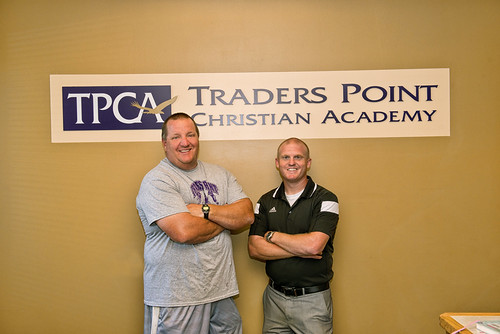 That added up to a 0-18 record heading into last weekend’s game at Dugger Union in faraway Sullivan County.

“I really believe we will win a game this season,” said Johnson. “But we’re still in the middle of building something. We have to just keep putting on our hard hats and picking up our lunch pails. It is a fun challenge.”

It could be tempting to think a conquest could come in Dugger, but the Bulldogs have survived the transition of becoming a charter school after the community of 900 had to shut down its public school in 2014. Union Dugger has over 200 students of which over 100 are males. TPCA has only 97 total students in grades 9-12 and just 45 male students.

“We have to recruit the lunch room and hallways [for players],” admitted Johnson.

Johnson welcomes 18-20 players per practice, depending upon injuries, illnesses or other reasons that may cause a player to be absent. Lack of depth is apparent.

“We only had 14 players our first year,” said Johnson, who notes there are 55 players competing in grades 1-6 this fall. In order to accommodate workable practices, Johnson draws upon other seniors to assist in non-contact routines.

“I think we all thought that the school would grow at a faster rate,” Johnson said. “There’s no doubt that the program will develop faster if the school grows.”

And that remedy could be coming soon. An aggressive capital campaign for the school has been designed by the home base, Traders Point Christian Church, which was founded in 1834 and was the third Christian church to be located in Marion County. (The church now has over 3,000 members in its modern facility on South Indianapolis Road which officially claims a Whitestown zip code.)

Plans call for a high school building that will hold as many as 500 high school students (125 per class), many coming from school districts in Zionsville, Pike and Brownsburg. By the start of the 2016 season, there will be a football field attached to school grounds. The field may not have lights, but it will boast a turf field.

Both Johnson and Stevenson believe Friday nights will be special with a home stadium. The Golden Eagles currently play home games at Zionsville West Middle School. 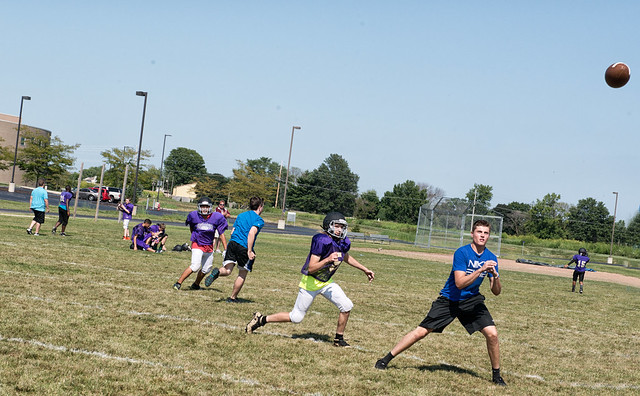 “We’re striving to attain excellence in all of our sports,” said Stevenson, who says the Golden Eagles have produced successful results in boys basketball and baseball. “Our other sports are farther along than football at this point, but we think we can be a sleeping giant when it comes to football.

“I love football, and I believe there are so many benefits involved for the players and the school. Football can create a culture where everyone comes together. It’s important for us to have a sound varsity football team.”

And Johnson sees this program developing. Johnson, 46, posted a 36-34 record in six years at Eastern Hancock. The Royals also won three sectionals during the Johnson years. After being an assistant coach at Heritage Christian for four years, Johnson accepted the building challenge at TPCA.

“It’s something different every day,” said Johnson, whose team faces Southside Home School on September 4. “But it’s also very exciting to be part of a Christian education program.”

Johnson welcomed back four Golden Eagles who have been part of all three varsity editions.

“During our first season, we grabbed some kids who never played football,” said the coach. “We had to teach them everything. Now we have some experience, and we are a lot more physical.” 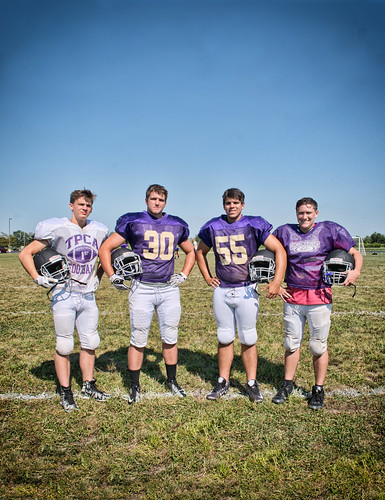 “He is steady, but he is still learning the position,” assessed the elder Johnson. “He’s the kind of player a program needs to produce. He has improved greatly over his three seasons.”

Johnson calls Kanzler “one of the school’s best athletes…he really likes to compete.” The Golden Eagles boss also believes that Wilson will eventually play college football at the Division II or III level.

And the TPCA mentor is confident that there will be extraordinary news on campus when the Golden Eagles snag that first victory.

“It will be fun when we get one,” said Johnson, whose Golden Eagles face a lineup of intriguing possibilities. The Hoopeston (Illinois) Cornjerkers were 0-7 last season and sacrificed 56.9 points per game; Edinburgh once lost 52 straight games; Anderson Prep Academy lost its opener 53-6 to Frankton; and Covenant Christian enters its first season on the gridiron.

Meanwhile, Johnson and Co. continue the daily process in working for victory No. 1. Practice starts with a prayer, followed by a call of “family” as the huddle v breaks.

“A good team is brotherhood,” said Kyle Johnson. “TPCA kids are very close. There are no cliques. Our teenagers include everyone, and there is no exclusion of any student. I feel the football team should mirror the school philosophy. Our team came up with it [family], and it has stuck. We are family within a family.”

And the family is ready to celebrate as one.