Once known predominantly for open-wheel racing and feed corn, Indiana has become a player in the craft beer and distilled spirits industry. There has been a slight surge of distillery tasting rooms opening in the greater metro area and a significant rise in popularity as Hoosiers are becoming as discerning about their choice of spirits as they have become over craft beers.

No stranger to our publication, Zionsville resident Dr. Chuck Dietzen has graced the pages of Zionsville Monthly over the last few years. We have featured his extraordinary work as the former head of the Pediatric Oncology Rehabilitation unit at Riley Hospital for Children, his ongoing work as the founder and president of Timmy Global Health and his work as co-founder of iSALUS.

It comes as no surprise to Dietzen’s friends and fans that he has embarked on another fascinating venture – distilling quality spirits along with co-founders Mel Lytton, Kevin “KP” Paul and Steve Ortman. 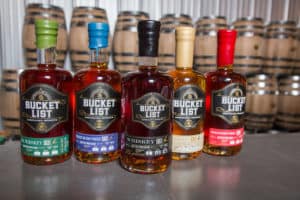 We sat down with Dietzen and fellow co-founder and master distiller Lytton to learn about their label Bucket List Distilled Spirits’ genesis and how it stacks up against other local distilled spirits.

“It’s all about ‘Spirituality,’” Dietzen quipped. “I like anything that brings people together to do something positive. What’s great about it is Bucket List memorializes one of Mel’s friends who had cancer and wanted to create the best sipping whiskey ever. Mel brought some of his friend’s whiskey to my house, and I took a dab of it. I told Mel, ‘I think he [Mel’s friend] succeeded, so we call our line of spirits Bucket List as a tribute to him.”

Lytton is originally from the Blacksburg, Virginia, and currently resides in Burlington, Indiana. Lytton met Dietzen six years ago on a fateful road trip and a presentation on the Shroud of Turin where they drove up to Fort Wayne as strangers but came back as forever friends.

“Our church was doing a presentation on the Shroud of Turin,” Lytton recalled. “Chuck also does a presentation from a medical standpoint on the shroud and crucifixion. I had never met Chuck before, but by the time we got back from Fort Wayne, it was like we’d known each other our entire lives, and we’ve been close friends ever since.”

On the back of every Bucket List Label, one can read the tale of Lytton’s dear friend and inspiration behind the label.

“I grew up in the mountains of Virginia,” Lytton shared. “My friend and his father were bootleggers. Both spent a little time in hoosegow.” Lytton chuckled at the memory and continued, “The son, in his later years, developed cancer and was told he was terminal. He decided that he was going to make the best moonshine that had ever been made. He did, and we enjoyed it.”

Lytton offered his thoughts on his venture with Dietzen and what Dietzen brings to the label.

“People know and appreciate Chuck – he’s a great guy,” he said. “He’s compassionate and a very good friend. He loves what he can do not only for children but for people. This is just an extension of that. I think it [Bucket List] may be a way, eventually, to have some money come back that could go to helping kids. We’re [Chuck and I] are people of faith, which is not always a good thing to say in today’s world, but I’d like to think that if Jesus were here with us now, he’d sit down and have a glass.” 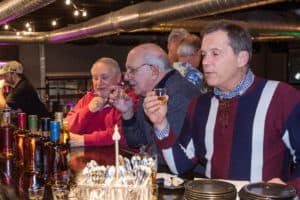 “When you look at all the fundraisers we do, this is a big part of it [Bucket List],” Dietzen stated. “People coming together and celebrating is all part of it while incorporating an opportunity to produce our own bourbon whiskey, do it well and have some fun with it.

Dietzen and Lytton were originally looking to distill down in Indianapolis until they had an encounter with another Zionsville resident and familiar face, Patrick Mullen.

“I ran into Patrick and told him that we had a still and were ready to roll, and he said, ‘I know a place you need to check out,’” Dietzen said. “He’s been running the kitchen at Danny Boys Beer Works in Carmel. So, in one location, you’ve got outstanding beer, great spirits that we’re distilling onsite and the quality of food that people in Zionsville have always liked when Patrick’s Kitchen was there. It’s all here at Danny Boys.”

Bucket List is currently being distributed by Indiana Small Batch, an independent wine and spirits distributor.

“We’re not making enough yet to try and get every big distributorship in the country,” Lytton explained. “We don’t have that kind of volume yet.”

When asked how Bucket List stacks up against other local distilled spirits, Lytton replied thoughtfully, “I think we’ll hold our own with any of them. I’m proud of what we’re doing. It’s kind of like a lot of other things. Some people like Coke, and some people like Pepsi. There’s room for both, and they’re both right. I like what we’re producing. Our black label, that I’m extremely proud of, has a very soft finish. It’s higher on the corn and smaller on the rye, so you don’t have a lot of burn (or spice) on the back of your tongue. It’s aged in small barrels, which works really well.”

The distillers submitted three products in a competition in California this past December and took gold in all three. This has encouraged the team to keep on growing, one bottle at a time. Bucket List’s latest product is its Corn Whiskey. Bottled at 100 proof, it appears harsh but is as smooth as honey with an incredible finish. Lytton used his late friend’s original recipe but took it a step further.

“We took it a step further by barrel aging it in a used bourbon barrel for a short time,” Lytton shared. “It gives it a beautiful gold color. Even just a few months in the barrel, it picks up a few tones and hints from the bourbon and the oak itself, bringing it to the forefront, and it’s just incredibly soft.”

“Tyler has a good grasp of distilling,” Lytton said. “He is a fine young man and is doing a tremendous job.”

Where does it go from here? Dietzen replied, “We hope to increase production and do some other creative stuff. To us, this is fun and brings people together to enjoy each other’s company.”