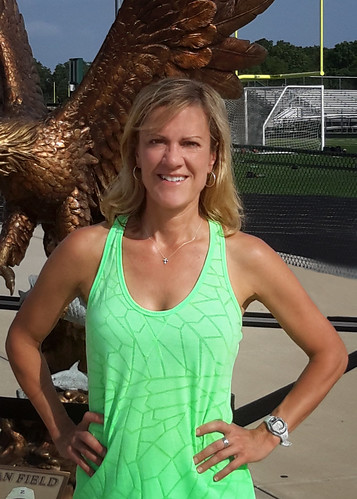 Zionsville Girls Cross Country Head Coach Suzanne Rigg doesn’t sit on the sidelines during practice. Rigg strides alongside the girls during daily workouts. At 50, Rigg still keeps pace with runners decades her junior. It’s a feat not many can boast, but then again, Rigg is not your typical runner: she is a former Olympic marathoner.

Most identify Coach Rigg as wife to John or mother to Oliver, age 16, and Sophia, age 14. Few know Rigg was once a powerhouse in the running world, racking up countless awards and accolades before landing a spot on the British Olympic marathon team in 1996. She’s humble that way. The story of how one woman journeyed from a tiny Midwest town to arrive at the world’s biggest sports stage—and then ultimately landed in Zionsville—is a compelling tale.

Suzanne Rigg was raised on a farm in Essex, Iowa. “I loved being from a small town because you didn’t have to be good at anything,” Rigg gushes. “You could do everything.” Rigg fluttered between countless activities, but it quickly became apparent that she was in fact good at something: running. In sixth grade, Rigg smoked her competitors in an 800-meter “fun race.” It was the first display of Rigg’s natural ability and the start of her remarkable running career.

With only 17 students in her graduating class, Rigg’s high school didn’t offer a cross country team. Rigg started a team and competed as the lone runner for her school. She won the Iowa Cross Country State Championship as a junior and finished second in her senior year. Iowa State University took notice and offered her a full-ride running scholarship.

Rigg flourished at Iowa State. In her freshman year, she was the top freshman cross country runner in the United States. She earned an All-American title during her freshman and sophomore years for her stellar performance in the NCAA cross country finals. Rigg’s coach marveled at her endless stamina and called her an “old washing machine that won’t quit.” But the intensity of training took a toll on Rigg, and halfway through her sophomore year Rigg quit the team.

During her senior year, a tragedy brought Rigg back to running. In 1985, the Iowa State cross country team was returning from the NCAA cross country championship meet when their plane crashed. Seven teammates and faculty perished in that accident. Rigg says the event was life-changing. “I could have been one of those people,” she recalls. “Half the team survived and half didn’t. I looked for meaning and asked why.” Rigg returned to help grieving teammates and rediscovered the spark for running. She rejoined the team and racked up another All-American title in her final year of competition.

At Iowa State, she began dating fellow runner and British student John Rigg. Shortly after graduation, Rigg followed John back over to Liverpool, England, and eventually the two married. Rigg trained with the Warrington Athletic Club and found success in many high-profile races. The British Athletic Federation took notice of Rigg’s successes and asked her to compete for Great Britain. Once her dual citizenship was secured, she began racing for the British.

In 1995, Rigg set her sights on securing a spot on the Great Britain Olympic marathon team. She trained vigorously seven days a week. “I was basically sleeping, eating, and training,” Rigg asserts. To acquire a position on the British Olympic marathon team, runners must post the three fastest marathon times in a nine-month period. In September of 1995, Rigg ran the Berlin Marathon in 2:34:19. Her finishing time landed her a spot on the team, and she was on her way to the 1996 Olympic games in Atlanta.

Rigg chuckles, “It was strange being from Iowa and running for Great Britain in Atlanta!” She refers to the experience as surreal. “I never imagined in my little town that I would be running in the Olympics. I never even dreamed that!”

Rigg says the whole Olympic race was a bit of a blur. “In the first five miles, I was struggling,” Rigg remembers. “I knew there was a long way to go, but it was the Olympics! If I had to walk or crawl, I would still cross the finish line.” A third of her competitors dropped out of the race. Rigg finished in 2:52:09. She considers her time disappointing, but not surprising due to some hurdles she experienced in her last few weeks of training.

Shortly after the Olympics, Rigg hung up her running shoes and embraced her new role as mother to Oliver and Sophia. She declares, “I had a new reason to be. I wasn’t a runner anymore; I was a mother.”

Six years ago, John’s job with Eli Lilly brought the family to Indiana. Rigg says she felt like it was home the minute she stepped off the plane. 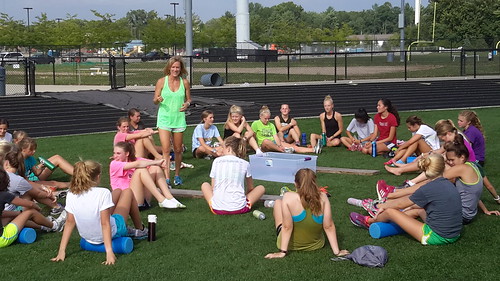 Last year, Rigg landed the role of Zionsville Girls Cross Country Head Coach and Distance Coach for the Zionsville Girls Track Team. She coaches her daughter along with 40 other girls. Her son runs for the boys’ cross country team. In her first year as cross country coach, the team made it to the state championship meet, a first in school history. Rigg hopes to repeat that success with this year’s team.

Rigg reflects positively on the journey that landed her as coach. “I love being the coach. They are wonderful girls and they make me happy. I get with them and feel like I’m 16 again,” she laughs. “It’s not all about the running; I love being around them.”