As a sixth grader, MaryClaire Swanson casually joined the Zionsville Middle School (ZMS) cross country team for “something to do.” She plugged away at practices and races. In her first season, Swanson consistently clocked a 20-minute 3K race. As a novice runner, her times were respectable but far from competitive. 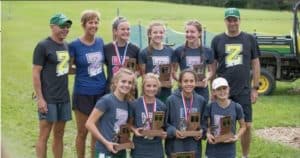 After Swanson’s first season and on the cusp of summer break, ZMS Head Cross Country Coaches Vicki and Marty Wilkey encouraged their athletes to run 100 miles over the summer. Swanson took the Wilkeys’ instructions to heart and logged 117 miles in the span of three months.

In the first race of Swanson’s second season, 13-year-old Swanson erupted onto the course. She blew past the 3K finish line in a little over 12 minutes. Swanson placed third out of 250 runners.

Her father Bret recalls the coach’s reaction. “Our daughter and Coach Vicki were thrilled. Coach Vicki gave her a big hug and then asked, not with disappointment but with pride and belief, ‘You know what’s better than third place?’”

MaryClaire’s story is not an isolated tale. Parents and students alike rave about the ZMS cross country program. When the conversation turns to the Wilkeys, a line forms to gush over the much-beloved coaches.

The husband and wife team took over the helms of the ZMS cross country program in 2013. Their first team consisted of 16 runners. Six seasons later, 99 runners fill their roster. Their teams are not only robust but also talented. In the last two years, the ZMS girls’ cross country team earned second place in the middle school state competition. The boys’ team secured second place this year and fifth place in 2017.

Churning out winning teams is only part of the Wilkeys’ recipe for success. They demand dedication and work but add emotional connections and fun. “Running without fun is just running,” Vicki recites as a popular mantra to the team.

The “fun” aspect of the program is legendary among parents and runners. The Wilkeys organize “Fun Fridays,” scavenger hunts, ugly T-shirt relays and water balloon tosses. On “Mean Coaches

Day,” Vicki and Marty place folding chairs on the side of the track. The coaches dine on McDonald’s while belting out friendly taunts to their athletes completing hard workouts. The runners enjoy this playful interaction with their coaches and rank “Mean Coaches Day” as a favorite.

With the fun comes the hard work. “We do push the kids. It’s not all fun,” Vicki affirms. “I think the kids are proud of themselves when they work hard. We hear all the time, ‘I didn’t think I could do that.’”

The Wilkeys, both former collegiate runners, often complete workouts alongside their athletes. “I think there is bonding with shared suffering,’” laughs Vicki.

Marty adds, “The kids trust and give you more respect when you’re doing the workout with them rather than standing there yelling on the sidelines.” Parents voice appreciation for the Wilkeys’ high standards.

Holly Dimmett, a cross country mother, says, “They encourage the runners and stay positive while at the same time not tolerating any nonsense. They remind the athletes and parents at the beginning of the season that although they coach kids at all ability levels, the athletes must take it seriously and show commitment. They remind everyone, ‘This is not a running club! It’s a sport!’”

While the Wilkeys achieve athletic results, it’s also the personal connections and intentionality that earn the coaches accolades and praise.

Coach Vicki makes personalized goal banners with individual time goals for each female athlete. Coach Marty creates goal sticks for the boys. Before big races, Coach Vicki writes each girl an individual note of encouragement. The Wilkeys hand paint “power” rocks plastered with motivational sayings. Each runner selects a rock with a saying that specifically inspired him or her.

At the end of the last season, Vicki handed each girl a handmade decorated box. She placed a card inside the box with quotes like “Some days are just messy” and “It’s going to be ok.” On the back of each card, Vicki wrote her phone number. “I told the girls you can call me when you’re at your worst, and I will still love you.”

Within the last year, Athletic Director Kelli Antcliff encouraged Vicki and Marty to read “What Made Maddy Run: The Secret Struggles and Tragic Death of an All-American Teen.” The book examines the suicide of a Penn State track runner and discusses the mounting pressure placed on today’s athletes.

“It is a sad story, but the insight you develop is that kids have a large amount of pressure put onto them. If they put additional pressure on themselves, it can become catastrophic,” says Marty.

“You (as a coach) want to make sure you’re not adding to that stress. Kids put on a brave face. When you dig deeper, you realize they are under a lot more stress than we experienced at that age.”

The Wilkeys thinks the focus of sports needs to shift from results to the process and the athlete. Part of that change could come with mandatory psychological well-being training for coaches.

The pair believes a better understanding of their athletes’ background and emotional state could help them as coaches and mentors. The Wilkeys also feel coaches should examine how their actions pile and contribute to the stress placed on athletes.

Along with psychological training, the Wilkeys believe strongly in promoting existing relationships between teachers, coaches and students. They are exploring ways to encourage those relationships by providing donations to teachers or coaches who may lack the funding.

The Wilkeys just completed their sixth ZMS cross country season. For the winter, the couple will keep busy with their “day jobs.” Marty serves as the Battalion Chief for the Pike Township Fire Department. Vicki works for Community Hospital Network as a nurse practitioner in the Infectious Diseases Department.

In the spring, the duo will coach the ZMS distance track athletes. They’ll continue to operate under the philosophy that runs all their programs: “Work hard, have fun and keep things in perspective.”