Reflections on the Boston Marathon

Local Runners Talk about Their Experiences in the Race 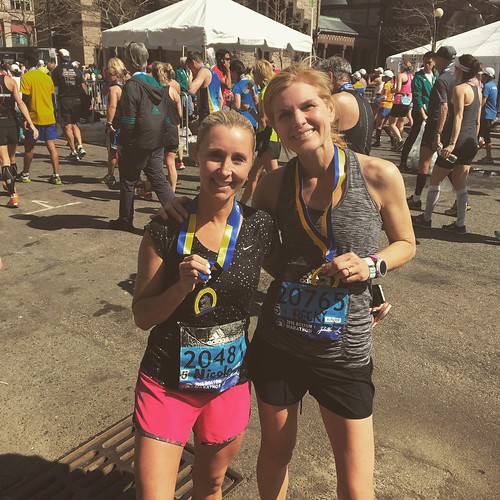 As I was wheezing and trudging up Heartbreak Hill in the Boston Marathon, I decided a new pastime was in order. Needlepointing, for example, seems to involve less pain and perspiration. I’ve never heard of anyone landing in the ER due to origami. And can you lose a toenail while arranging flowers?

I scanned my fellow runners. Many wore pained expressions. Some laboriously walked while hunched over, clutching their sides. As a group, few of us modeled the sport well.

But, this was Boston. And even the most distressed runner would rather hand over a kidney than relinquish his or her race bib. To distance runners, the Boston Marathon is sacred. It is our Super Bowl, a pinnacle

race that attracts the racing elite and other “ordinary” qualifying runners.*

The Boston Marathon is like a fraternity; they only let so many join. To get the opportunity to run in the marathon, a runner must meet or exceed qualifying times (based on age and gender) in a certified race during a designated timeframe. And those who secure a race number find the experience without equal.

Zionsville’s Nicole Seiler, who ran in her first Boston Marathon April 18, notes that the training and qualifying is the hardest part. She credits training partners with helping her stay focused.

“Knowing I was going to chat with my friends at 5:30 a.m. on dark, 15-degree mornings got me out of bed and into my running shoes,” admits Seiler.

This year’s race marks the 50th anniversary of the first woman runner in the Boston Marathon. In 1966, Bobbi Gibb hid her long ponytail under a hooded sweatshirt and snuck onto the course. Her finish is credited with dispelling prevalent misconceptions on women runners and opening the door to females competing in the race.

In 1972, women were officially allowed to compete in the Boston Marathon. This April, over 12,000 women participated in the race including five Zionsville women. (Ten Zionsville runners competed this year, the largest number since online records were kept in 2000.)

Seiler says that the anniversary’s significance added to the experience of the race. “It was inspiring to me that over 12,000 women completed the race this year,” says Seiler. “Two years before I was born, women

weren’t even allowed to compete.”

Since 2013, she has been delighted to see the city of Boston rebound and embrace the race. She says, “I am thrilled that the people of Boston and all who participate have shown great strength in coming together to continue to make the Boston Marathon weekend a special event for all involved – whether runner, local spectator, visiting spectator or volunteer!” 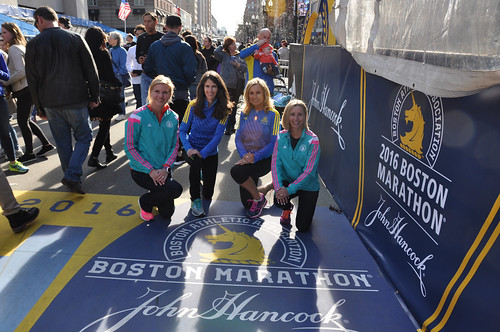 For Zionsville’s Barbara McLaughlin, her fourth Boston Marathon was special. McLaughlin’s father passed away on April 7, and she was debating about whether to compete in the race. Ultimately, she decided to make another Boston appearance.

“I carried my dad’s ring with me [during the race],” says McLaughlin. “Every so often, I’d reach back and feel it in my pocket; I’d get the boost I needed. He was the original health nut of our family – teaching me to love running at an early age – and I thanked him a lot on the course that day.”

McLaughlin says it was a tender finish because the “two of them” crossed the finish line together.

As for this runner, my second trip to the Boston Marathon was emotional. To secure a race bib required months of training and hundreds of logged miles.

And because of all that was required to arrive at Boston, I was in awe of those I ran among in the race. It’s impossible to remain stoic when you witness a runner competing on a prosthetic, a blind athlete racing beside a guide or Dick Hoyt (age 76) pushing his son in a wheelchair along the course.

When I reached Boylston Street, the final leg of the Boston Marathon, tears welled in my eyes. I was running along the same street that bombs had devastated just three years earlier. Now, four-deep crowds flanked the street and roared their approval. It was a party, and they were celebrating all of us.

At that moment, I forgot about those times during the race when I thought death would be a sweeter option. Needlepointing no longer seemed appealing.

I knew exactly why I was at the Boston Marathon.

Rebecca Wood competed in the 2014 and 2016 Boston Marathons and qualified for next year’s race.

*Some of the Boston Marathon bib numbers are reserved for those who make substantial donations to designated charities.