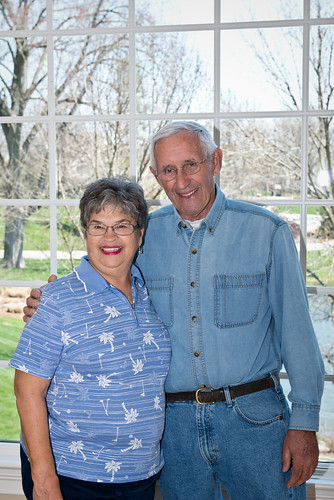 Zionsville residents Steve and Vicki Snider were recognized for their years of service and a host of contributions they’ve made to their hometown over the last 16 years. The Ranj Puthran Agency’s monthly Helping Hands Award recognizes individuals, couples or groups that make a difference in the community. Steve and Vicki have three children and six grandchildren and have been married 47 years — or, as Steve said, “not long enough!”

They have both been members of the Zionsville Lions Club for 12 years. Together they were named Zionsville’s Town Crier in 2006. Steve has received awards of distinction from the Lions Club, including the Melvin Jones, Woods and Eagle Victory award. He just received an award from the Masonic Lodge for his 50-year membership.

Vicki also is exemplary and has been awarded the Woods and Miyamoto Awards, tenure and memberships awards. She was a dedicated leader with the Boy Scouts prior to her service at the Children’s Bureau, where she is a sustaining member and was president during 2001-’02.

Along with their close friends and family, the Sniders have organized countless civic-minded projects, hay rides and hotdogs, Santa House and VIP Christmas sleigh remodeling projects, Lions Park cleanup initiatives, Trick or Beers in their neighborhood — and the list goes on and on.

“We do most everything together. It’s the only way she can keep track of me,” Steve says.

When asked what the value is in serving a community, Vicki said, “If you are a part of your community, then you feel like you belong and it gives you self esteem.”

The Ranj Puthran Agency Helping Hands Award is awarded monthly to recognize outstanding volunteers in
the Zionsville community. To nominate someone for the award, visit Facebook.com/RanjPuthranHelpingHands or email [email protected]