Penny Putters: Women’s Golf League Has Been a Fixture in Zionsville for Decades

Most Wednesday mornings, the Zionsville Golf Course is buzzing with activity. That in itself is not unusual, but look closely and you’ll notice that lady golfers dominate the course.

They call themselves the Penny Putters. For the last 43 years, this Zionsville women’s golf league has maintained a wildly successful group which partners golf with fun.

History of the League
The origins of the league are unknown, as none of the 76 current members are original to the group. However, Penny Putters President Pat Green can explain the league’s name.

“They had a putt pot,” Green recalls. “For every putt, you put a penny in the pot.” 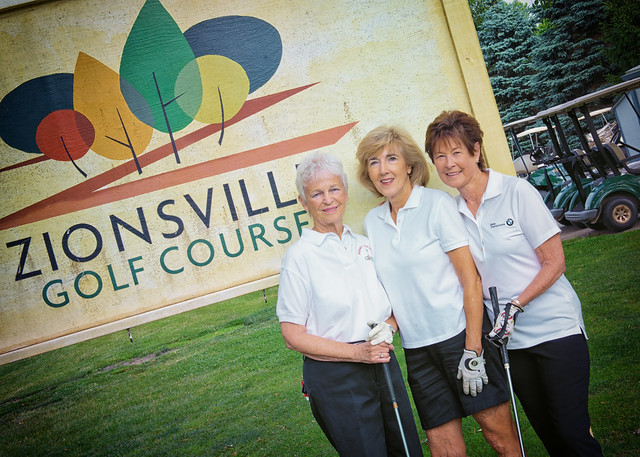 Green says the pot would then be carried to the league’s monthly luncheon where the women could enter to win the proceeds. This tradition continues today with the pot’s average monthly windfall at $40.

Member Kathy Byrum says there’s a nickel pot too. “Besides a penny a putt, you put in a nickel for every curse word too,” she chuckles.

Tee Time and Ladies Who Lunch
Generally, the league has operated the same way since the beginning. From late April until late September, the group tees off every Wednesday morning at the Zionsville Golf Course.

Once a month, the league hosts a scramble followed by a luncheon meeting. To accommodate the large group size, luncheons are held at the Lion’s Club. A local restaurant caters the meal.

Green says the league’s affordable costs and the quality of the golf course attract many women to the group.

Members pay $135 for dues and 11 rounds of golf. The monthly scrambles and luncheons are an additional $20 per month. Golf carts are extra.

“I’ve belonged to a private club for 25 years, and I think this golf course gets really close to equaling a course we pay a lot of money to attend,” adds Green.

The Penny Putters also make a point to give back. One scramble per season is played for a designated charity. Each golfer contributes $20 to enter the scramble, and the proceeds go directly to the charity. Local merchants also sponsor a hole.

Meet the Golfers
The average age of a league member is in their 60s, says Green. The golfers span in age from their 40s to their late 80s. Green adds with a chuckle, “But some won’t pen down their age.”

The majority of the members live in Zionsville, but the league attracts women from neighboring communities like Brownsburg, Westfield and Whitestown. 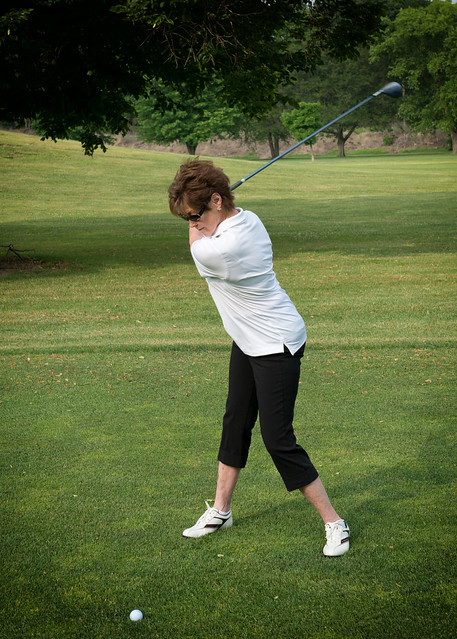 Green states that golfers of all abilities are welcome. She says that group members shoot anywhere from the mid 40s to twice that number.

Member Nancy Walworth appreciates how the group welcomes a variety of abilities. “If not, I’d have been out a long time ago,” she laughs.

Many of the women are new to the sport. Several picked up golf clubs for the first time in the last several years.

“It was something I had never done but thought I was capable of doing,” Green says. “It’s more fun than working in the yard.”

Byrum adds, “It is a way to meet friends and be outside. I had never golfed, but I thought, ‘I am going to try this.’”

Thriving Group
Due to the capacity limits of the golf course, Penny Putters caps their membership at 75 golfers. Green applauds the group’s success and notes that not all leagues are as vibrant as the Penny Putters.

“The word got out about the group,” says Green. “Most golf courses have a group, but I don’t know any group which has as many members as we do. I have friends in groups at country clubs that are struggling to keep members in their league.”

Although golf brings the ladies together, the group is tight-knit. Green reports that the average member remains in the group for 12-15 years.

Byrum credits the friendships with keeping the women in the group.

Green says, “You meet a lot of different people. The people are extra friendly and caring. As long as I live in Zionsville, I will golf with the league.”

Byrum vows with a smile, “I will continue to play as long as I can walk.”