Story and photos by JJ KAPLAN 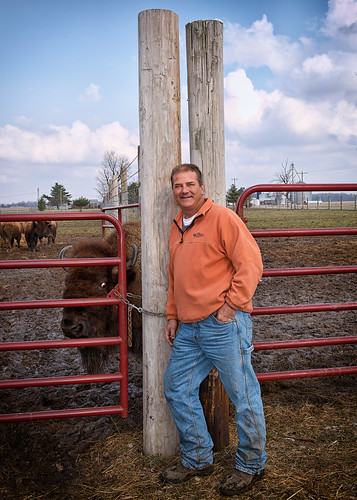 HOME. We all have a feeling of emotion of what our home was and is today. In a formal context, it is the place where one lives permanently. In a more esoteric context, it may be defined as a place to completely relax, both physiologically and psychologically. We all need that place as a support to refresh and recharge ourselves. For Micah Marsh, his home is a place to honor a rich past and envision a fulfilling future.

Tucked away in a little corner of our community, Micah’s home is known as the End of the Trail Ranch. Here he enjoys a simple life while keeping his family’s heritage alive by raising American buffalo, also known as bison. These shaggy behemoths of the Great Plains can weigh as much as a ton, can race up to 40 mph, can jump 6 feet vertically and can quickly pivot to fight predators. Sounds like a great family pet, right?

On a beautiful clear day, I ventured out to learn about the bison business and how Micah, along with his Uncle Bud Marsh’s help, is bringing back a part of our national heritage.

In 1962 Micah’s parents, Gene and Carol Shelburne Marsh, and their brood of six boys, moved to the ranch and thereby realized his father’s love of all things related to the Old West. From cowboy hats to Indianhead nickels to boots to buffalo hides, the entire family embraced these relics of the Old West. Micah grew up with a great reverence to our rich western heritage.

After his father passed away in September 2007, Micah and his beloved wife, Lenise, purchased the homestead and made it their own. Micah wasn’t sure what to do with the land and considered raising elk or deer. He never considered bison until his cousin suggested the majestic animal. It seemed to fit right in with the ranch and seemed to pay homage to his father’s lifelong love of all things Old West.

The couple began building a formidable 8-foot-high fence to keep the buffalo from roaming and to keep well-meaning visitors at bay. On more than one occasion, Micah has returned home to find curious visitors at the fence trying to pet these wild beasts. They are not tame and friendly. They do not like to be petted. In reality, they make lousy pets. But they do make excellent red meat. 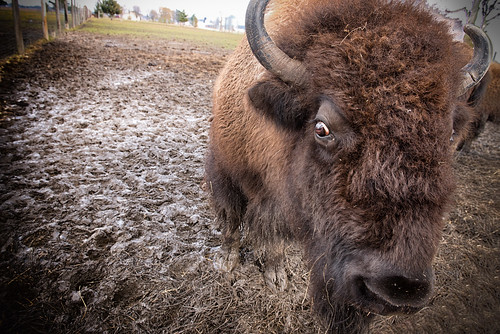 Micah’s bison meat is Indiana state-inspected, professionally processed and packaged according to even stricter guidelines than required by law. Micah is a member of the National Bison Association. He goes to great measures to ensure that his grass-fed bison is absolutely the best, most tender and healthiest that it can be.

Bison meat is extremely lean, and because you are cooking with very little fat, it cooks faster and at lower temperatures than other types of red meat. According to Micah, the key to cooking bison is “low and slow.” This makes for a savory, heart-healthy meat low in cholesterol, high in B-12 with richer, fuller flavor. 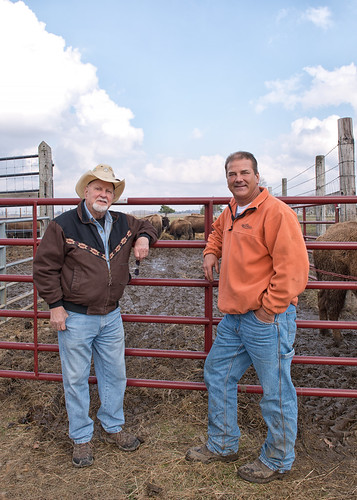 Micah’s Uncle Bud shares a passion for Native American culture and became a great source of support to help manage the day-to-day running of the business. Lenise was also instrumental in manning the booth at the Zionsville Farmers Market, selling bison tenderloins, roasts, ribs, summer sausage and more.

Life was good — but it was not destined to last long.

In February 2013, Lenise was diagnosed with inoperable brain cancer — a life-changing development. Suddenly their universe stopped, and all attention and energy was focused on supporting Lenise. The Marshes were touched by the outpouring of community help from family and friends, and from clients and colleagues from the Zionsville Farmers Market, who would bring fresh produce and homemade goods. These gifts meant the world to Micah and Lenise, as they retreated into their little cocoon to make the most of the time left.

The subsequent 10 months were filled with doctors’ appointments, chemo and radiation, and IV treatments — and dealing with the inevitable. During this time, Lenise’s physical appearance changed drastically. She no longer resembled the vibrant, perky blond that Micah fell in love with so long ago. But even as her physical appearance changed, Micah felt himself falling in love with Lenise all over again.

Lenise lost her battle with cancer this past December.

The last couple of months have been extremely difficult for Micah, and his home has become a place of comfort, gratitude, renewal and rebirth. He is adjusting to a new normal, which includes days working as a property manager and working his bison farm. He is looking forward to expanding his farm and bison business. He plans to sell bison at this year’s Zionsville Farmers Market and the year-round Normandy Farm Market. The “freshest, most delicious bison meat in the entire area” also is available by appointment. Call (317) 488-1178. In addition, Micah is also donating a buffalo hide to charity, with proceeds going to the Boone County Cancer Society.