There is a sign on South Main Street, situated just past the bridge over Eagle Creek, with an image of a heron and the words, “Community Wildlife Habitat: 1st in Indiana, 2nd in the nation.”

I have driven past this sign hundreds of times, wondering how Zionsville earned this distinction. A few weeks ago, my curiosity prompted me to investigate. I eventually learned that the story behind the sign began with a particular woman at a precise moment in time.

The woman was Elizabeth Mueller. The year was 1998. One afternoon, Mueller was looking through her National Wildlife Federation magazine when she noticed that Alpine, California, had become a Certified Community Wildlife Habitat. It was a new title, and Alpine was the first to receive it.

“Right away, I realized Zionsville should go for this,” said Mueller. “I called my friend Myrene Brown and said, ‘Myrene, we can do this!’” As an avid gardener and nature-lover, Mueller instinctively understood the benefits such a designation could bring to the community.

They contacted the National Wildlife Federation (NWF) and researched the requirements for certification. The first task was to form a volunteer team to manage the effort. They named theirs “Habitat CPR” for Habitat Creation, Preservation and Restoration. In addition to Mueller and Brown, the team included Nancy Carpenter, Vince Flecker, Phil Knots and Michael Kojetin. 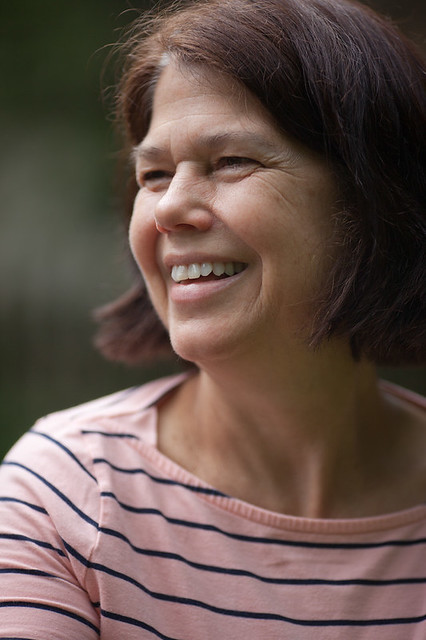 From 1998 through 2000, this group organized thousands of hours of work toward their goal. Their efforts fell into two main categories. One was to have about 100 individuals, businesses and public places certify their own property as wildlife habitat. This meant it had to provide wildlife with food, water, shelter and a place to raise young.

Mueller said this was a challenge at first. “The idea of encouraging wildlife was foreign to most people,” she said. “They would say, ‘We don’t want to attract wildlife.’ They were thinking of things like raccoons. We explained that our main goal was to attract birds and butterflies, the pollinators, things that would be beneficial to the environment.”

The other main requirement was to conduct at least 15 activities in the community to
promote environmental stewardship. They met with garden clubs, spoke to Scout troops, taught school classes, offered free lectures and much more.

By the fall of 2000, their application was complete. Dozens of homes, St. Francis Episcopal Church, the Nancy Burton Trail, the Chamber of Commerce and many more entities had certified their land. The team had spoken to hundreds of people about topics like minimizing lawn chemicals and using native plants to sustain butterflies.

In response, Zionsville received the honor of being the second Certified Community Wildlife Habitat in the country.

Beyond Certification
Zionsville’s certification helped lay the foundation for the national program that now boasts 83 certified communities from Alabama to Oregon. “It was a new program back then,” Brown explained. “As we came up with ideas for projects, we shared them with NWF.”

Here in Zionsville, certification was like a stone dropped in a lake, ripples spreading in every direction. Remember a regular column on habitat in the Times Sentinel?   Elizabeth Mueller wrote that from 1999 to 2004 as part of this effort.

Have you found more native plants for sale at Altum’s? The team worked with nurseries too.

Have you spotted red-winged blackbirds at the middle school nature trails or heard woodpeckers as you walked through Turkey
Foot Park? These projects have ties to Habitat CPR as well.

An entirely new organization – the Zion Nature Center – was created in direct response to Mueller’s vision and action. This center is located next to Eagle Elementary School and hosts year-round programs on the environment.

Learning from Gardeners at Home

As I spoke with three of the original Habitat CPR members, I received invitations to their personal gardens. I first visited Myrene Brown’s house in a nearby subdivision. Cheerful bird song greeted me upon arrival. Brown’s yard is full of native trees and shrubs, including redbud, oak, serviceberry, fringe tree and viburnum.

Beds brim with indigenous flowers such as coral bells, bloodroot and camass. She also has many stems of cup plant, which birds and insects love. “Cup plant makes little wells where the leaves join the stem. It can hold a surprising amount of water,” Brown said as she tilted one over and poured the morning’s rain-shower into her hand.

Amidst her lush plantings is a rain garden. Facing drainage problems on her property a few years ago, Brown became an expert on this type of garden. She has explained to many how the little rain gardens in the village work. These small areas surrounded by concrete curbs are planted with trees and perennials and mulched with gravel. They collect and filter storm water that runs off adjacent roads.

Next, I visited Michael and Judy Kojetin’s home, which has been included on the SullivanMunce garden tour. Their numerous flowerbeds are bordered by low rock walls and dotted with bird houses and feeders. The Kojetins also have a pond, an orchard, compost bins and elevated beds for salad greens (to keep the rabbits out). 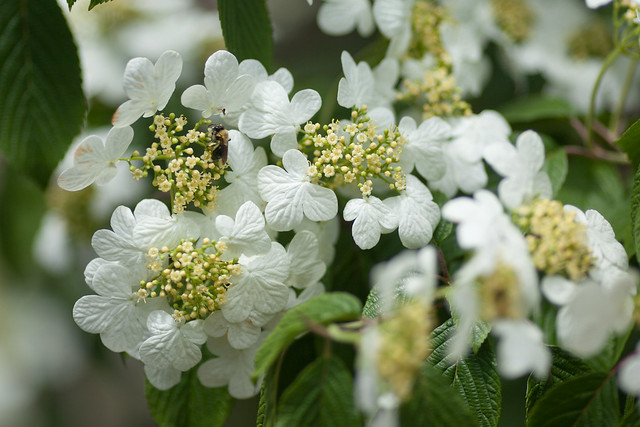 Colorful prayer flags from Nepal encircle a vegetable plot. As Michael said, “Habitat gardening is a lifestyle for us. We love to see all the birds, and we’ve learned to coexist with the other wildlife.”

Lastly, I drove north to Steve and Elizabeth Mueller’s home on four acres in rural Zionsville. Though Elizabeth prefers not to be on the local garden tour, her gardens have been photographed for national magazines. “This place was featured in the inaugural edition of a Better Homes and Gardens magazine called Nature’s Gardens,” she laughed.

We began in the “children’s garden,” a shady grove with framed beds of soil and little rakes and shovels for the grandkids. We followed stepping stones through a wooded area to “frog pond” where sunshine sparkled on water that rollicked over moss-covered rocks.

We examined a stand of native columbine, its reddish blooms buzzing with bees. We gazed over a patch of prairie planted with coneflowers, aster and sweet black-eyed-susans that will explode into bloom later this summer.

Heading back toward her house, Mueller went inside to invite her three-year-old grandson to join her on the front porch. She had made a recent discovery and wanted to share it with him.

Carefully pulling back a small tree branch that hung by the porch railing, Mueller pointed to a cardinal’s nest that held a little clutch of eggs. Her grandson was delighted. Cardinals, he said happily, were his favorite birds.

“It’s so important to get kids outdoors,” Mueller said. “I’m glad so many people are starting to understand this.”

“Any effort to provide wildlife habitat also benefits people,” she explained. “These kinds of gardens help reduce pollution. They take less time and fuel to maintain once installed, and they provide beautiful places to relax.”

Watching Mueller hold her grandson’s hand as they walked through her gardens affirmed this. Their faces lit up as they discovered a secret hiding place he could share with cousins under a tree.

The sign on South Main Street and all the details about how it came to be are a bit like dusty photo albums to Mueller now. They are cherished, they are important, but what matters most is that her grandchildren – and all children – learn to love what she and her friends have endeavored for years to nurture and protect.