When Matt Reeve was in the sixth grade, an eighth grader named Bill Lehman moved into the house next door. Little did Matt and Bill know that this seemingly cosmic accident would play such an important role in their lives. They were neighbors and best friends through the school years, and then Bill married Matt’s sister, Jenni, and eventually they became business partners as the owners of Millennium Sounds. From that grade-school friendship that started in Warsaw, Indiana, many years ago, Bill and Matt have built one of Indiana’s largest home technology providers with three locations in the state. 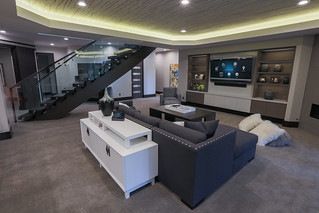 Bill and Matt started Millennium Sounds in Warsaw in 1999. As demand for their services grew in the Indianapolis area, it made sense for them to open a store here five years ago at 3949 East 82nd St., just east of the Fashion Mall. In 2013, they added a third location when they purchased Premier Custom Solutions, a 20-year-old business located in Ft. Wayne. In 2013, they also launched Millennium Security Systems, which, as the name suggests, provides home security services. They also purchased Classic Blinds in 2008, which sells both manual and automated blinds, shades, and window treatments.

Those in the Indianapolis area who have homes on Lake Wawasee, Lake Maxinkuckee, Lake Tippecanoe or any other northern Indiana lake will find Millennium Sounds’ three locations to be tremendously convenient. You can meet locally at Millennium Sounds’ Indianapolis location to plan your project, and they will have the installation and any follow up service performed by their staff at the Warsaw or Ft. Wayne location.

As with many in the home technology business, Millennium Sounds began primarily providing sound and video for home theaters. However, as home technology has developed and expanded, so have the services provided by Millennium Sounds. Presently, Millennium Sounds can provide, in addition to the home theater, a package of total home automation that includes lighting and thermostat control, camera and security systems with door locks, multi-room audio, and automated blinds, all which can be controlled remotely by your laptop, smartphone or tablet. Millennium Sounds is the only local dealer to earn the distinction of being named a “Pinnacle Dealer” by Control 4, the highest recognition given to Control 4 dealers. Control 4 is one of the world’s premier manufacturers of home automation systems. 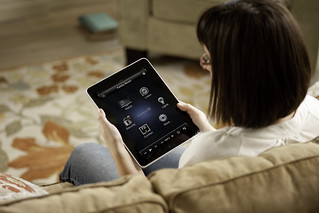 According to Bill Lehman, one of the newest developments in their business is the transformation of the old home theater room into a multimedia room that incorporates the home theater screen and projector to create a world of virtual sports. The home theater room has become somewhat similar to the formal dining room in that it’s nice to have, but it doesn’t get that much use anymore. With the new technology, you and your friends can go from enjoying the latest Hollywood blockbuster movie to playing a round of golf at Pebble Beach or St. Andrews or more than 70 other famous golf courses around the world in minutes. Not a golfer? Virtual hockey, baseball and soccer also are available to incorporate into the multimedia room. Call Bill or Matt to see how they can expand the usefulness of your existing home theater room by incorporating virtual sports.