Local Merchant on Managing Life Before and After Ulcerative Colitis

Maybe you have noticed the darkened storefront at 106 N. Main St. and the silence of one of Zionsville’s most dedicated voices, Robert (Bob) Goodman, co-owner of Robert Goodman Jewelers.

At the end of December, Goodman and Rose-Marie, his wife and business partner, announced that their store would be closed for as many as six weeks as a result of Bob’s surgery on December 28. It is their hope that by sharing their story, people will have a better understanding of what ulcerative colitis is and help those who have been diagnosed or know someone who has been. The Goodmans want those people to feel encouraged that life does go on, and it can even get better.

They’re not popular topics of conversation among most people, but for over one million Americans, Crohn’s disease and ulcerative colitis are more than just uncomfortable subjects – they are diagnoses that become a way of life. Goodman recently and openly discussed his battle with ulcerative colitis and how his current condition continues to impact not only his life but his business on occasion.

According to the Crohn’s & Colitis Foundation, approximately 1.6 million Americans are affected by either Crohn’s disease or ulcerative colitis. These diseases tend to be hereditary and affect males and females equally. Crohn’s disease is a chronic inflammatory condition of the gastrointestinal tract that can affect either end of the tract. Ulcerative colitis, what Goodman has been managing since his 20s, is a chronic inflammatory condition limited to the colon.

If you or someone you know has been diagnosed with ulcerative colitis, Goodman’s story, in addition to education received from medical practitioners, will help you develop a better understanding of the disease. But more importantly, as Goodman will attest, you can learn how to manage the disease and living a happy and productive life comfortably and confidently.

“I was diagnosed in the mid-‘80s,” Goodman said. “I had symptoms for some time but didn’t pay a great deal of attention to them. Rose-Marie probably told me to go to our doctor, and I went in to see him.” Bob shared that he does remember that he had an increase in the frequency of times that he needed to go to the bathroom, a common symptom of ulcerative colitis.

Goodman underwent a rectal exam and was promptly diagnosed with the disease. He was traveling overseas a lot back then as an international buyer for Goodman Jewelers. His diagnosis did not stop him in his tracks.

“Right after my diagnosis, I traveled to Hong Kong,” Bob recalled. “I acquired a Gastroenterologist (GI) doctor. I had a remarkable GI who has since retired, but I’d go into to see him regularly and had two colonoscopies a year. When you have colitis, you’re far more likely to develop colon cancer, so they check you out more often. People have the idea that colonoscopies are a big deal. I’m here to testify that it’s okay. You’re under [anesthesia] – it’s okay. It’s the prep that sucks.”

Bob continued to travel abroad on buying trips and work jewelry shows, and he learned how to adapt to making a living with ulcerative colitis and do so in a little more comfortable way.

“I continued traveling, and our GI would put me on various diets, none of which worked,” he shared. “I was off caffeine for a year, and that didn’t do anything. Gratefully, I never had all of the classic symptoms – high temperatures and anemia. I just went to the bathroom – a lot. I began carrying a satchel with a complete change of clothes with me all the time.”

Rose-Marie added, “The other thing he always did, no matter where we went, was locate the bathrooms.”

Bob quipped, “I knew where the bathrooms were all over the world. I would tend to wait until the last minute and would have to suddenly take off. We were in Basel, Switzerland, to work at a major jewelry show, one we attended every year, and I knew where they [restrooms] were. This is a big show. One year, we were working with a vendor, and I had to suddenly take off for the bathroom. Well, they had moved the bathrooms. I was in instant panic mode. But I found it [the restroom], and we got through it and made it work.”

Both the Goodmans spoke about the effects that Bob’s disease had on the entire Goodman family. Their children grew up watching their father manage colitis and recover from stints in hospitals as they grew up. They agreed that their children have a unique perspective on pain and suffering, and having witnessed Bob’s optimism and perseverance, their children have grown into compassionate and resilient adults.

“Our kids will tell you that there was stuff that I didn’t do because I was exhausted at the end of the week and stuff like that, but other than that, we all viewed this as simply something you lived with,” Bob said. “It was an inconvenience, but the reality of it is I had something that could be cured by taking my colon out. Other people have things that are much more devastating. In no way shape or form was this a disability. This wasn’t going to stop me from doing things. We just had to learn to deal with it.”

After failed attempts at remission, Bob had his colon completely removed in 1991. While no one knows the exact causes of ulcerative colitis, they do know what aggravates it. It is also known to be a hereditary disease.

After removing Bob’s colon, the surgeons installed a J-pouch, an internal pouch that is created from the end of the small intestine and functions as a rectum.

“It [an Ileostomy pouch] used to only be an external pouch,” Bob explained. “It hangs off of your stomach. I had the J-pouch for about four to five years, but five percent of people who have the J-pouch contract Pouchitis, which is essentially colitis in the pouch. I was in the five percent and had to go back in and have the pouch taken down but not removed. They kept the pouch in for two reasons: One, it would’ve resulted in a more involved surgery, and secondly, the doctors figured that if something better comes along, they can hook it back up.”

The surgeons installed an external Ileostomy pouch, which is what Bob has been successfully functioning with for several years.

It has been a journey for Bob and his family. There was one incident in his mid-50s where he developed sepsis after what should have been an outpatient procedure. The near-fatal experience only left Bob more determined to live his life and live it well with a positive outlook.

While Bob was admitted in hospitals and recovering from surgeries with Rose-Marie by his side, the couple was able to rely on Bob’s dad, Raymond Goodman, to step in and take over the daily operations at their store in Zionsville while Bob recovered. After the passing of Bob’s dad, the couple was able to rely on associates who knew their business. The Goodmans are the only employees at their store and do not have the luxury of Raymond’s presence to step in for them during this medical leave. So, they decided to close the store during Bob’s recovery and are anxious to get Bob back on his feet and behind his showcases serving customers, a great source of joy and motivation for Bob.

“Back in mid-August of 2018, my seal started to fail,” Bob said. “We were playing with that for a couple of months with the Ostomy team down at Methodist Hospital. We tried all different kinds of combinations of supplies and none worked, so we had a consult with the surgeon to relocate my Ileostomy [pouch]. The surgeon scheduled my [sixth] surgery for December 28.” 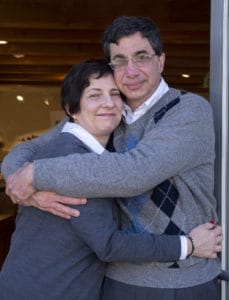 The recovery process is typically a five-day stay in the hospital followed by a six-week recovery. Bob emphasized that he is eager to get through his recovery, and once he can manage the pain and is given an “all-clear” from his physicians, he will be back on his feet “rocking and rolling.”

“Rose-Marie and I don’t deserve business; we earn it, and we are fortunate to have our business in Zionsville,” Bob emphasized. “When we were asked to share our story, we decided it was a good opportunity to shine a light on living with colitis. It was also an opportunity to explain to our community why we had to temporarily shut our doors, inform our customers and friends about what is going on and be open and transparent. Zionsville is a unique and special community. We are all for one and one for all. Zionsville is truly like a big hug.”