It started as a challenging class assignment for Park Tudor freshman Fariya Shamrin.

A native of Bangladesh who now calls Indiana home, Fariya was taking her turn at interviewing a United States World War II veteran for the Legacy Initiative project at Park Tudor High School. The student sat down with Lyle Pelkin, an Army veteran who served in the European Theater during the war.Fariya never blinked. She marched into her interview and completed one of the most rewarding days of her life. “I was nervous and it may have been difficult to talk to him for the first five minutes,” the Carmel resident said. “But once he got started, things went really well.”

After the four-hour session, Fariya formed an informal friendship with Pelkin, and has exchanged emails with the war veteran.

She has now provided her interview to the Legacy Initiative at Park Tudor. The project has been executed by hundreds of students at the northside school and has produced six hardcover books in the Words of War series, which includes letters, interviews and other communications from veterans of the Civil War, World War I, World War II, the Korean War and the two recent U.S. military conflicts in Iraq and Afghanistan. The series of books have been sold at major local bookstores and are available in the Park Tudor gift shop.

Leading this charge of recording and maintaining history is Park Tudor teacher Kathryn Lerch, who launched the project in 1999 after she was inspired by a New York Times article that recalled wartime letters sent home by soldiers and the “buried testimony of men and women who had known war too well.”

Since 2002, the Legacy Initiative has partnered with the Veteran History project and the former office of Senator Richard Lugar on the Library of Congress’ efforts to document veterans’ oral histories. 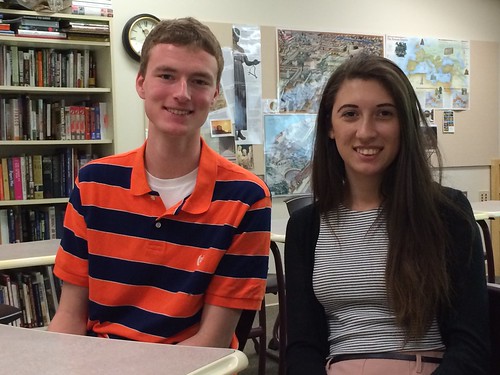 Lerch’s army includes more than 40 Park Tudor students each school year. Besides Shamrin, this year’s class of interviewers and researchers included Thomas Knowles of Zionsville and Abbi Dill of Monrovia. Knowles interviewed a friend of his great grandfather, Jack Morfee, who was born in 1919 and also served in the ground assault against Nazi Germany.

“It was eye-opening,” recalled Knowles. “I was able to learn what he went through during the war and how he was so modest about his accomplishments.”

Knowles also learned that despite being wounded during battle, Morfee returned severely wounded soldiers to safety at their camp. He earned a Silver Star for his heroics.
“These are things you don’t learn in a classroom,” said Knowles. “He wasn’t trying to glorify war and what he did. But he suffered trauma and saw friends get killed. It took a lot of guts. The veterans made great sacrifices.”

For Dill, the lessons of war were learned from a different vantage point. Her interview was conducted during a school visit in France and with a veteran of the French military.

Would she do the project again? “Yes, it was a great experience,” Dill said. “But it may not be for every high school student. There is a hefty time commitment.”

Probably the biggest investment of time has come from Lerch, who has herded 700+ students into the project. The students climb aboard as freshmen and most wade through the research, interviews, writing and other assignments for their next four years at Park Tudor. Some students have encountered emotional sessions with their veterans who open up in recalling their military services. Others have witnessed communication and transcripts from Holocaust survivors, including seeing a passport from Austria that had a giant J (for Jewish) stamped on it.

Two of Lerch’s students interviewed 87-year-old Jim Baize of Carmel. Only 15 at the time, Baize got a veteran to pose as his father so he could enlist in the Navy in 1943. After stopping in Pearl Harbor, his mission continued at the famous island of Iwo Jima.

“I had never heard of Iwo Jima,” Baize told the students, emotionally collecting himself. “The beach was just full of bodies. I [his boat] took a mortal shell 20 yards out and lost 38 marines.”

Baize would recover from his physical wounds. But the students learned the emotional scars lasted much longer. As reported in the fourth edition of Words of War, Baize also learned that he was originally listed as killed in action as a member of the USS Highland.

“When you interview the veterans, you realize how brave they were,” said Shamrin. 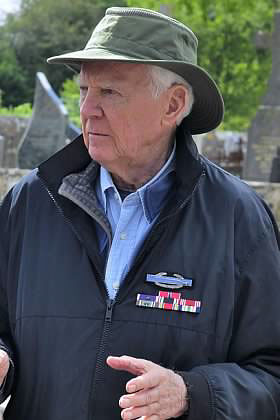 Another World War II veteran interviewed by the students is Zionsville resident Carver McGriff, who was part of the Normandy Invasion. His interview with a Park Tudor student was in 2003. The McGriff story provided harrowing, first-hand experiences collected from a young soldier in World War II.

“History enriches the lives of our students through hands-on experiences,” said Lerch, who has her battalion pour through thousands of letters and documents besides conducting the one-on-one interviews.

Sadly, the time interviewing World War II veterans is evaporating. Survivors are now pushing 90 and dying from age and not bullets. Thus, the project is advancing via more interviews with Vietnam Veterans and those who served in Iraq and Afghanistan.

“We’re anxious to talk to people who want to share their experiences,” wrote Lerch. “In turn, we see an opportunity to actively engage our students in the study of humanities. Our anthology will help preserve the legacy and heritage of these wartime writers.”

And the project will continue. Those with letters and other correspondence from our country’s wars should contact Lerch at Park Tudor for future studies by the students and potential inclusion in future editions of Words of War.