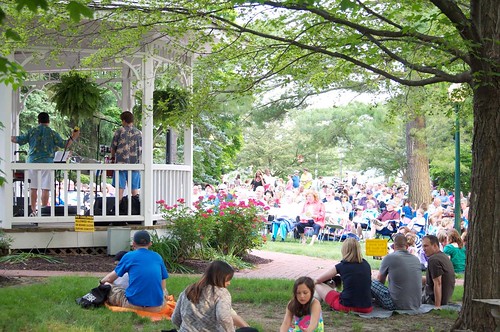 Lincoln Park, named for Abe Lincoln’s visit in 1861, is a serene and peaceful half-acre, nestled right in the heart of Zionsville (at the corner of 1st and Oak streets). Often, the white gazebo at the north end is a setting for photo shoots and weddings, but on Wednesday nights in June and July, it comes alive with eclectic music and entertainment—a summertime treat for local residents.

Last year, the Zionsville Cultural District took the reins of the Lincoln Park Concert Series from the Chamber of Commerce. The seven-member committee brought in a couple new artists, were blessed with favorable weather, and saw crowd numbers rise. This year, aiming to appeal to a broader audience, they made some additional changes.

According to committee member Sarah Zack, a survey at the end of last year’s series showed that people wanted new music, so with the exception of Cornfields and Crossroads (a bluegrass band that was the number one favorite last summer) and the Motown sounds of Lonnie Lester, all the performers are new to this year’s stage. Zack credits Tim McLaughlin for scouting out the talent for the 2014 concert series.

Chad Mills, area singer-songwriter, kicks off the series on June 4 with his acoustic, folk sound.

“Chad and his band are the epitome of Americana,” McLaughlin said.

It will be a family-focused event, and from 6 to 7 p.m., prior to the concert, Paige’s music will be on hand to let kids try out an assortment of musical instruments. The Sullivan Munce Cultural Center will also offer face painting.

McLaughlin looked to Zionsville and surrounding areas for something different than in years past, and brought in a variety of genres that the committee hopes will appeal to a wider audience.

Karen and the Beast, featuring Zionsville resident Karen Irwin, will deliver a mixture of rock and soul on June 18, and McLaughlin hopes that “she’ll channel her inner Janis Joplin.” 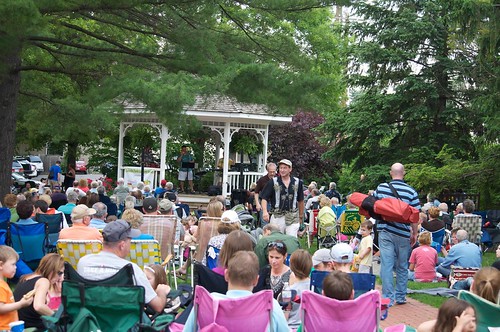 Also included in the lineup is The Tommy Baldwin Trio, a Rhythm and Blues band from North Central High School, that will feature Carson Diersing, an expert harmonica player who is sponsored by Hohner Harmonicas.

“We’ll end the year with Broadway Showstoppers,” McLaughlin said. “Our accompanist, Doug Krantz, will work with local performers who will perform Broadway (maybe Disney) standards.” So if that’s up your alley, be on the lookout for upcoming auditions.

In addition to the music, the Zionsville Cultural District is working with local restaurants to offer “A Taste of Zionsville” at each concert. Menus will be posted a week in advance on the event Facebook page, but, of course, you’re always welcome to bring your own picnic!

All concerts are scheduled from 7 – 8:30 p.m., rain or shine.
(Lions Clubhouse is the alternate venue, in the event of inclement weather: 115 South Elm Street).