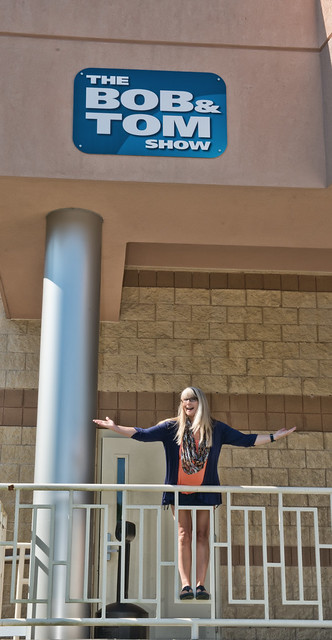 For the last 30 years, Kristi Lee has charmed morning radio listeners. As news director for WFBQ-FM’s “The Bob & Tom Show,” Lee and her team of cohorts tackle current events, engage in on-air antics and host a parade of comedians and celebrities.

Along with Bob Kevoian, Tom Griswold and Chick McGee, Lee serves as the “core four” of the syndicated show heard in 115 affiliates nationwide. Lee refers to herself as the “den mother” and says she frequently acts as the voice of reason to a cast of male coworkers who gravitate towards shenanigans and salty innuendos.

“I think it’s because you’re dealing with three guys,” Lee says. “Testosterone is a funny thing. It makes men say and do things they wouldn’t say or do if a woman was in the room. They forget I’m a girl half the time.”

Lee continues, “I’ve never had brothers. I look at it as a bunch of brothers I deal with all day.”

“I just love the community here,” Lee asserts. “I don’t have to worry about my girls so much. That was the strong factor for me. They can walk everywhere and ride their bikes. They know their neighbors.”

Lee hails from the west side of Indianapolis. Her radio roots trace back to a course she took at Ben Davis High School. Lee enrolled in the radio class on the encouragement of a classmate who touted the course as “easy and fun.”

According to Lee, teacher Dana Webb changed her life. Webb noticed Lee’s talent and encouraged her to pursue a career in radio. Under Webb’s assistance, Lee secured radio and television positions in the community.

In 1984, Lee landed the position of news director for “The Bob & Tom Show.” Initially, she delivered a few minutes of news every hour. Once the show became syndicated, Lee’s role morphed into a more intricate member of the show. Her delivery of the news became more conversational and less routine.

Lee admits listeners do not tune into the program for a dry reading of current events.

“People are not listening to ‘The Bob & Tom Show’ for the news,” Lee says. “They are waiting to hear us go off on the news or to hear a conversation about something else.”

She continues, “If you want to know what’s going on with the debt crisis in Greece, you will not be listening to Bob and Tom. That’s not what we are there for. We’re there to take you away from that and to have fun.”

Lee acknowledges that she looks for the “weird and weirder” stories. She touts her ability to find conversation starters and hot button stories. However, Lee’s quick-witted

coworkers and guests can often derail a discussion. 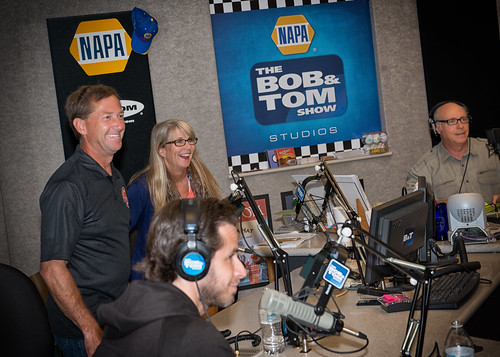 “I can guarantee poop will be mentioned at least once a show,” laughs Lee. “It’s a running gag to see how long it will take to mention fecal matter. My most common word is ‘really’ in a sarcastic tone.”

A cast of comedians and celebrities join the daily banter. Lee says a few are memorable. She refers to musician Kid Rock as a “pleasant surprise” and as “one of the most interesting and fun guests.”

Lee calls Dolly Parton a “gem of a woman.”

“If there’s a sweeter woman on the planet, I’d like to meet her,” gushed Lee. “She was so nice, personable and down to earth.”

Lee confesses to being star-struck by Peter Frampton. She says meeting him was the pinnacle of her career and proclaims Frampton to be her idol.

In the nicest way possible, Lee acknowledges that some guests are “not what we expected.” Lee calls Tom Griswold the “best interviewer in the world,” and she says he can salvage even the worst conversation.

“Even if guests are bad, you’d never know it,” Lee claims. “Tom has a way of getting people to talk.”

Sometimes the morning unfolds in unexpected ways. Lee chuckles as she recalls the show about her pet chinchilla. One day, as Lee was preparing to go to work, her chinchilla became spooked and hid under Lee’s vehicle. Frantic,  Lee phoned work and explained her predicament. Bob and Tom found the situation humorous and sent show character Donnie Baker to capture the chinchilla.

On live radio, Lee and Baker spent the next several hours chasing around and eventually grabbing the fugitive pet. She called that show “unintentionally funny.”

Lee remembers another show where she and Bob were reporting from a hot air balloon. With a giggle, Lee says the balloon landed in a field. A farmer watched the scene unfold and rushed to the balloon. When he realized it was Bob Kevoian in his field, he became giddy and introduced the radio host to his pet goats named Bob and Tom. “With live radio, you never know what can happen,” Lee snickers.

Along with her position at “The Bob & Tom Show,” Lee has also worked for the Pacers, ESPN, ESPN2, Fox Sports and other sporting events. Recently, she moved away from sports reporting and gravitated towards voice-over work. On August 1, Lee hosted the Zionsville Street Dance.

Lee considers Zionsville a retreat from her busy schedule. She enjoys working out, curling up with a good book at home and spending time with her daughters.

Among her many fans, Lee’s biggest cheerleaders are her daughters. Lee’s daughter Ava penned an article in the August issue of Seventeen magazine titled, “My Friends Think She’s Cooler Than I Am.” Lee is tickled about her daughter’s words.

Lee has no plans to leave her spot with Bob and Tom anytime soon. “I don’t see it ending, but everything comes to an end. I try not to think about it.”

She has no intentions to move out of Zionsville.