Jeff and Julie Qualkinbush: Strengthening relationships by giving back

Jeff and Julie Qualkinbush will attend a ribbon cutting ceremony at Eskenazi Health later this month, where the Staff lounge in the Women and Babies department will be named after Jeff and Julie for their generous donation to the hospital.

Jeff and Julie Qualkinbush are the quintessential “couple next door.” They were married at Zionsville Presbyterian Church in 1993 and moved their family to Zionsville 12 years ago. Jeff and Julie are members of Traders Point Christian Church, working professionals, and parents of Caitlin, 20, a sophomore at Butler University, and Corinne, 18, a senior at Zionsville Community High School. Jeff is a partner in Barnes and Thornburg LLP’s Indianapolis office, and Julie is the owner of JQ Designs LLC, a spatial design firm. The Qualkinbushes spoke to me about the projects they have been passionately involved with, the upcoming ribbon-cutting for the staff lounge at Eskenazi Health that will be named after them and the positive effects that being involved in their community has had on them as individuals and as a couple.

In addition to designing new construction custom closets, pantries and built-ins, Julie is the current president of the St. Margaret’s Hospital Guild. The Guild is the sponsor for the 53rd annual Decorator’s Show House and Gardens, a fundraising project that raises funds for the services and programs of Eskenazi Health, formerly Wishard Health Services.

Julie spoke about her involvement with the Guild and about the enriching relationships that she has forged with her fellow Guild members. “The women are just amazing,” she said. “I’ve built up great friendships with the women in the Guild. I joined [the Guild] and immediately became very involved. I became Decorator Chair in 2011-12 for the Tobias House. It was an exceptionally big job, and I loved it. When I saw the difference that we were making for the hospital, it solidified that this is what I want to do.” 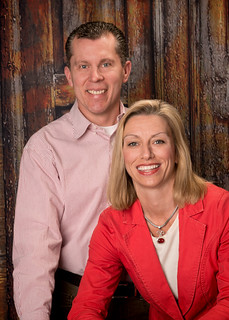 volunteers with a diverse age demographic. Julie described the unique and lasting bonds that are formed when working in the “trenches” with her fellow Guild members. “When you’re cleaning toilets with someone, you’re going to bond,” she said. “Nobody looks glamorous doing that, and the competition disappears. When you’re in the trenches with someone, you can be down to earth and really talk to one another. That first year as a Guild member is instrumental in building close friendships. You build relationships with people in their 80s and 20s, and that’s the best part of the Guild.”

Through the Guild, Julie was introduced to Eskenazi Health when it was known as Wishard Health Services. Julie explained what compelled her and her husband Jeff to step up their efforts to assist the hospital and its programs and services.

“I was introduced to Wishard through the Guild,” Julie said. “It wasn’t even on my radar before that. I went to the hospital and saw the doctors and staff working there. The old facility was falling down around them, and the doctors and staff often said it was their favorite place to work. This had a great effect on me. They work for the cause and the people, not the money.” 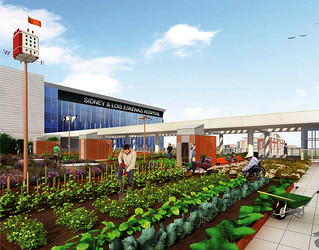 As an example of the new projects underway, a 5,000-square-foot rooftop garden will sit on the top of the Outpatient Care Center on the Eskenazi Health campus.

Julie gave high praise to Dr. Lisa Harris, CEO of Eskenazi Health, and to the doctors and staff for the improvements that have been introduced along with their brand-new facility.

“They planned for four years and talked to hospitals from around the country to gather information while under the leadership of Dr. Lisa Harris, their CEO,” Julie explained. “She is just amazing, and she inspires me. They have thought of everything with this new facility, down to the dignity of the patients. For example, they invested in lifts that move their patients safely from the beds to the tables.”

When Eskenazi Health announced available opportunities for people to donate and receive naming rights to designated areas throughout the brand new-facility, Julie and Jeff decided to make a contribution on another level.

“It’s so easy to drive by things and give it a little bit of a thought but then keep on driving thinking, ‘It doesn’t affect me; I don’t need to worry about that,’” Julie said. “It does affect you because these people in need could be one of your family members or a friend of yours. Not only that, they’re human beings. My family has a strong belief that God put everybody on this earth for a purpose, and sometimes circumstances prevent them from fulfilling that purpose. If in some way I can help them have a little bit of dignity and feel like an important human being, then I have done my duty. I think that’s what we’re meant to do; we’re meant to give back.”

Jeff Qualkinbush shares his wife’s passion for building relationships within his community and was completely on board with Julie’s idea to reach out to Eskenazi and inquire how they could best assist the hospital.

“Shortly after I began working at Barnes and Thornburg, I realized that it was important to get involved in the community,” Jeff said. “I started by getting involved in the Ronald McDonald House and was on the board of directors for nine years. I am the past chair for the Indianapolis Public Library Foundation, which I have been involved with for 11 years. Throughout this time, Julie and I have been involved with other projects together in terms of charitable activities, but when she joined the St. Margaret’s Guild and I learned more about their mission, I wanted to become more involved. We met more of the people involved with Eskenazi Health; we’ve visited the new hospital and learned about the concepts they’re trying to bring to the new facility. Their focus is on total wellness and addressing not just the physical aspects and needs of a person, but also the mental, emotional and spiritual needs of a person. That really resonated with us. Julie and I believe that you have to treat the holistic person.”

Jeff spoke about the new Eskenazi facility and the cutting-edge programs they are able to facilitate with their new building and the funding that is received.

“With the new facility, it offers the doctors and staff a new platform to be able to really integrate more into the IU Health Medicine program with the training of the doctors and the medical school there,” he explained. “They have continually been one the best recognized burn centers in the region, let alone in the state, and I think this new facility is going to allow them to do even more things in that area than what they had contemplated they were able to do in the older facilities. Through Dr. Harris’ vision and her passion, she’s been able to motivate people in the community both from a financial and volunteer standpoint to just bring out a whole new possibility of learning.”

Jeff and Julie believe that it is just as important for couples to engage in a civic-minded project together as it is to be involved as an individual.

“I think that one of the most inherent things about people is they need to have relationships,” Jeff said. “The best way that they can help other people develop and develop themselves is through interacting with people and having those relationships. It’s very important to not just financially support organizations and activities if you can, but to find activities that meet your passion and develop relationships with those people. You will better understand what their needs are, and they will better understand what your passions are, allowing those to be better aligned. Find where your roots and passions, are and find a way to plug into the community or into the global community. Through that you’ll be able to not only better your community, but you’ll also find that you yourself have become a better person and have a better and brighter outlook about the future.”

Jeff concluded with this insightful observation that I feel we often overlook as busy members of our communities, as parents and as companions.

“We have very busy lives that often times will pull us apart — jobs and activities — and as a couple, you try to find recreational activities to do together. But more important, if you could have a civic or charitable organization that you could work with from time to time together, then that allows a common ground to talk about and to better understand each other. It’s not just a relationship between you, individually, and that organization, but it now becomes a couple relationship development activity.”

The Qualkinbushes will be attending a ribbon-cutting dedication ceremony later this month at Eskenazi Health, where the a staff lounge in the Women and Babies Department will be named the “Jeff and Julie Qualkinbush Staff Lounge.” Julie softly smiled and said that their designation will come as no surprise.

“No one who knows me will be surprised. I have spent many years working in the infant nursery room at church, and I love babies!”

2014 DECORATORS’ SHOW HOUSE AND GARDEN TOURS SET FOR APRIL 26 THROUGH MAY 11
The 53rd annual St. Margaret’s Hospital Guild’s Decorators’ Show House and Gardens, located at 5235 N. Meridian, will be open for public tours April 26 through