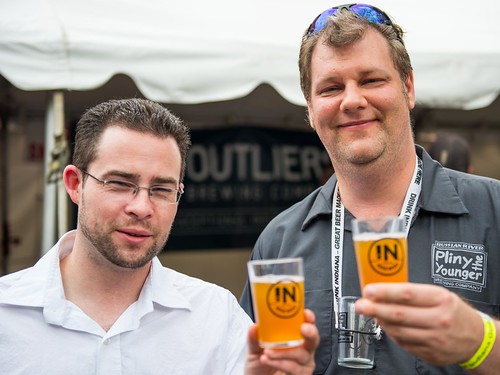 Once a year, Optimus Park in Broad Ripple plays host to a spectacular gathering of both craft beers and craft beer lovers in the form of the Indiana Microbrewers Festival. Located a few blocks north of Broad Ripple Ave. near the Indianapolis Art Center, this event becomes better organized every year. Lines for food, beer, and lavatories were as minimal as can be expected at a beer festival with approximately 5,000 people in attendance. Both Dr. Lauer and myself were in attendance, as usual. While Dr. Lauer found some new and interesting local/regional breweries, I must admit that it was difficult to ignore the tried and true breweries I know and love. It is also nice to know someone who can walk onto the back line and get beer more quickly.

Joe: For those who make it beyond Indianapolis, there are some interesting new breweries worthy of attention. 18th Street Brewery (Gary, IN) got their brewer from Pipeworks Brewing (Chicago, IL), which was named the best new brewery of 2013 according to ratebeer.com. Grapefruit Dead Imperial IPA and Hunter’s Double Milk Stout were both quite good.

Bare Hands Brewing (Granger, IN) was serving a Thai p.a.(sic) with hints of lime, ginger, and tea. It was quite interesting, and their other IPAs and Pale Ales were good, as well.

Evil Czech Brewery (Mishawaka, IN) poured a Bohemian (that means Czech-style as opposed to German) Pilsner that took me right back to Prague. Pilsner may seem boring to some, but good representations of the style are not exactly abundant in Indiana.

ZwanzigZ Brewery (Columbus, IN) served a golden blueberry ale that was full of blueberry flavor and aroma and yet was incredibly dry and refreshing.

Hans: I had that blueberry ale, and it was indeed delicious. For those who think fruit beer means sweet and cloying, read: It does not have to!

Joe: From Danny Boy (soon to be open in The Village of West Clay in Carmel, IN), there was a solid black IPA. New Day Meadery (Fountain Square) does not make beer, but their mead ranges from sweet and fruity through bone dry. They even make a mead with hops! Imperial Raspberry Breakfast Magpie was an outstanding mead.

Scarlet Lane Brewery (McCordsville, IN) won a Brewer’s Cup award for their Vivian Red IPA, which showed as well as advertised over the weekend. Their coffee coconut stout was dry and balanced.

Hans: My friend Leah from Taxman (Bargersville, IN) was pouring a Belgian Dubbel that was bone dry and incredibly attenuated (this means that there was no leftover sugar after yeast finishes its meal), as I have come to expect from this brewery. When people think that Belgian style beer is either too sweet or too syrupy, it is usually because of left over sugar, or under-attenuation. The Dubbel had the typical raisiney character of a Dubbel, but it was truly multidimensional in its flavor.

Union Brewing (Carmel, IN) focuses on cask-conditioned beer (meaning that the beer is carbonated in the keg) served from traditional hand-drawn beer engines (handpull). I’ve never visited England (home of cask-conditioning), but tasting the Monon Mild, with its grassy hops and soft mouth-feel, from Union is probably the next best thing.

Barley Island (Noblesville,IN) was serving a Saison (Belgian) that was crisp, dry, and refreshing, and yet was packing around 8% abv. Owner/Brewmaster Jeff Eaton is a more-than-competent brewer and a highly regarded judge.

Brugge Brasserie (Indianapolis, IN) rarely fails to bring a little sourness, and their Diamond Kings of Heaven 2014 did not disappoint. While the exact recipe varies from year to year, Owner/Brewmaster Ted Miller had been using the same wine barrel for some time, and it is populated with the appropriate microfauna to produce the lactic acidity for which Diamond Kings is known. After witnessing inexperienced festivalgoers spitting out Diamond Kings at a previous festival, there is always a password required to sample Diamond Kings. When it comes to sour beer—If you know, then you know.

On the American side of beer styles, Ted Miller also produces beer under the Outliers label. From Outliers, there was a strong Blonde Ale brewed with botanicals, Chinese rice wine yeast, and then aged in a brandy barrel for about a month. This beer had stunning complexity and a very refreshing quality.

Joe: That was also one of my favorite beers this year!

Hans: Triton Brewing (Indianapolis, IN) produced two incredibly unique and outstanding beers for the festival. French Toast Stout and French Toast Stout with Strawberries could not have been more aptly named and either one would be a showstopper on most occasions.

I have said before that Bier Brewery (Indianapolis, IN) makes the best and only pumpkin ale that anyone should drink. For the festival, they came with a barrel-aged Pumpkin Porter worthy of a best-in-show award.

Upland Brewing (Indianapolis, IN) came with a bunch of their Lambics, of which I was only able to taste the 2014 Peach Lambic, poured by the brewer himself, Caleb Staton. His Lambics have gotten better and better over the years.

Black Acre Brewing (Indianapolis, IN) was pouring Bitter Life Coffee IPA. It was a blend of American IPA and locally roasted coffee, the result of which was slightly citrusy from the hops and roasty and slightly bitter from the coffee.

Tow Yard Brewing (Indianapolis, IN) came in strong with their Horsepower Double Pale Ale, which is mildly citrusy but restrained enough in its bitterness that it could be a crossover beer for those hop-haters out there. It hides its 8+abv very well. Owner Mike Deweese also brought some gems from his cellar, which are certainly not available anywhere other than in his company, and rest assured, the right beer improves over time just like the finest of wines. I tasted 12-year-old World Wide Stout from Dogfish Head and 10-year-old Double Bastard from Stone. And remember that 2004 Beast from Avery that you thought would never mellow? Well, it did, and it was pretty good. Thank you, Mr. Deweese!

Tin Man Brewing Company (Evansville, IN) was serving a stout that had been aged in a Maker’s Mark barrel, and it was outstanding.

This festival has gotten better with each passing year. The available space has more than doubled since 2007, while the attendance is still pretty much the same. It rarely feels crowded, and there are plenty of food and washing facilities. Thankfully, we dodged the 90+ degree heat that is usually a factor at the Microbrewers Festival. Joe and I agree that it would not be possible to taste even half of what is typically available at this event, so please understand that this article is inherently incomplete. Just know that this is the premier beer event in Indianapolis each and every year.