Eric Simpson Pastor to the Pros and the Community

Zionsville Pastor Eric Simpson stands on the sidelines during Indianapolis Colts’ games. It’s a coveted spot offering an unobstructed view of the playing field. For many, this experience would evoke a flurry of excitement. Simpson, however, discusses those moments with a level of normalcy. His voice lacks fanfare. His expression remains calm.

But when the conversation turns to the spiritual transformation and growth of those within the Indianapolis Colts’ organization, Simpson becomes animated.

Simpson is an Indianapolis Colts Chaplain and Lead Pastor at Eagle Church. He refers to himself as “Lead Servant,” and he considers it a privilege to serve the Colts’ community, Eagle Church, and the Zionsville populace.

For the last 19 years, Simpson has acted in the voluntary position of Colts Chaplain. He shares this responsibility with local evangelist Ken Johnson.

Simpson says his role with the team isn’t rooted in a passion for football, but rather in a love for people.

“I enjoy football, but I do this more out of a calling for the spiritual development of people; it’s anchored in that,” Simpson said.

Kendra Simpson, Simpson’s wife, adds, “I think a big reason Eric is such a good chaplain is that he truly cares about the players. It does not matter that they are professional athletes. What matters to Eric is that they are growing in the Lord and being challenged in their faith.”

Simpson says every NFL team has a chaplain, but team owners and coaches determine the chaplain’s role and availability with the team. He praises Colts owner Jim Irsay, General Manager Ryan Grigson, and Coach Chuck Pagano for being supportive of the chaplain’s involvement with the team.

“They say, ‘We want you around and involved, and we value your help,’” Simpson said. “I don’t take that support for granted. I think it’s pretty special when you have that level of support from the top down. They recognize the value in building into young men’s lives beyond how they perform on the field.”

Simpson and Johnson maintain a heavy presence with the team. “I try to get a clear picture from Coach Pagano about what message he wants to see consistently delivered to the team, and then my role as a chaplain is to see in God’s word how can I reinforce that message,” said Simpson.

The duo lead a weekly Bible study for players and an additional weekly study for coaches. They conduct a chapel service the night before each game. Simpson estimates that half the coaches and players typically participate in those services.

Simpson attends every home game and about 80 percent of away games.

Pregame, Simpson floats around the locker room praying with an average of 25-30 players who request individual prayers. Before the team runs out onto the field, the players huddle together and offer up one more collective prayer.

During the game, Simpson stands on the sidelines and assists with warming up punter Pat McAfee, and he continues to pray. He says players approach him periodically during play to request additional prayers. If an injury occurs, Simpson is there to pray with and support that player and player’s family.

At the game’s conclusion, Simpson joins the team and team opponents on the field for a final prayer. Per NFL etiquette, the home team leads the prayer. “It’s neat to see players who were beating on each other for hours, grabbing hands, kneeling, and saying we’re brothers in Christ,” says Simpson.

Postgame, the team recites the Lord’s Prayer at the conclusion of Coach Pagano’s talk.

Beyond game day responsibilities, the chaplains offer spiritual mentorship, discipleship, and counseling for those within the organization. Simpson has assisted with numerous marriage ceremonies and funerals.

Simpson says his favorite part of his role as chaplain is the relationships he grows with those within the Colts organization. “It’s been 19 years of life together,” he said.

Hunter Smith, former punter for the Indianapolis Colts, appreciates how Simpson makes relationships with everyone within the Colts organization.

“Though he’s only been asked to minister to players and coaches, you will see Eric having conversations at all levels of the organization,” Smith said. “Eric sees souls, not titles.”

Pathway to the Ministry
Simpson says he was raised in a loving, but unchurched home in Newton, Iowa. As a high school student, his then girlfriend, now wife, invited him to church.

“I was in high school, and I didn’t know what Good Friday was; I kinda knew about Easter,” he admits.

At the age of 17, thanks to a nurturing youth pastor, Simpson became a Christian.

Simpson enrolled at Iowa State University and earned a business administration degree. Upon graduation, Simpson accepted a position with Eli Lilly & Company and relocated to Indianapolis.

Within a few months of his move, Simpson joined Eagle Church, a start up church on the west side of Indianapolis with less than 100 attendees. Simpson spent all of his free time serving the church.

Simpson confesses that although he enjoyed his position at Lilly, he was feeling more alive outside of work and in the ministry.

In 1994, Simpson was still working for Lilly when then Lead Pastor Kerry Bowman offered him an Associate Pastor role within the church.

“He said, ‘By the way, we can’t pay you,’” Simpson laughs. “I’ve never been part of a job interview where there is no pay involved.”

Simpson agreed to pray about the position. A few months later, the pastor offered some pay, and Simpson accepted the job. He refers to his transition from Lilly to the pastorate as a “holy crazy” moment. 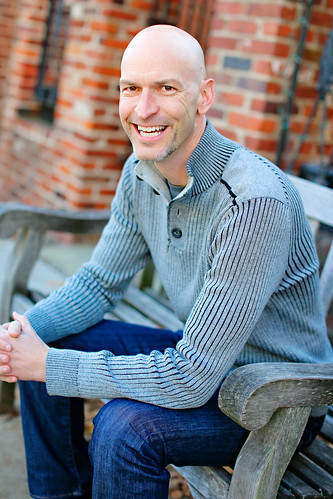 “Sometimes God asked us to do something that doesn’t make sense; that’s the crazy part,” Simpson said. “It was crazy looking on the outside. Why would you walk away from such a successful young career? Many said I was crazy. But I knew that was what God was calling me to do.”

Kendra was on board with her husband’s decision to leave Lilly and join Eagle Church. “When the opportunity arose, I knew in my heart this was something I could see him doing.”

When Simpson started with Eagle Church, the church was housed in a west side office building. Simpson recalls walking into his makeshift office on the first day of his job. Pinned to his desk chair was a note that read “Welcome Pastor Eric.”

“I stood there and stared at the chair,” said Simpson. “It was the first time I’d ever seen pastor attached to my name. I was a bit overwhelmed and humbled.”

Ministry in Zionsville
Meanwhile, Eagle Church was growing. Attendance had blossomed to 300-400 people, and the church was outgrowing its space. In 1998, to accommodate the larger congregation, the church purchased 94 acres of land in Boone County. Simpson calls the purchase a “congregational holy crazy” moment.

“It was a very large vision for a small group of people,” Simpson says. “When we moved up here, it was in the middle of a cornfield. We believed this was the land God gave us.”

In 2000, Eagle Church’s 82,000-square-foot Boone County facility was complete. Within the last 14 years, attendance has ballooned to 600-700. Simpson prays the church continues to grow and reaches the unchurched within Boone County and neighboring areas.

In 2013, Simpson accepted the job of Lead Pastor.

Zionsville Home
Simpson, his wife Kendra, and daughters Lilly, 14, and Kaylynn, 9, have called Zionsville home since 2003.

“I’m really grateful the Lord led us to Zionsville,” Simpson asserts. “I’m grateful our church home is here. I can’t think of a better place to raise our kids.”

Simpson continues, “I drove to Indianapolis with a car with three boxes in the back seat knowing one person in Indianapolis, and I land in the best suburb. I get to pastor in a church and live here; my kids get to go to school here. Who would have thought that 22 years ago? Jesus is so good at guiding lives.”