[Editor’s note: Occasionally we like to do a follow-up story and this is one of those instances. Eric’s story appeared in our July 2013 issue as he prepared for deployment to Afghanistan. Thankfully, Eric returned safe and sound and willing to share his experience with us.] 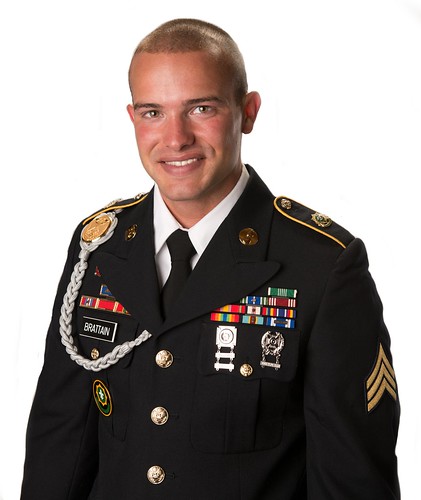 A year ago, I introduced you to one of our brave soldiers serving in the United States Army. Eric Brattain had been stationed in Germany but was being deployed to combat in Afghanistan back in August 2013. He has completed his term and is now safely back in Germany. He came home to Zionsville for a few weeks in July. I wanted to know what combat is like in Afghanistan and to catch up with “one of our finest” to share his journey with you.

Eric had been living in our base in Vilseck, Germany for 3 ½ years, performing vehicle maintenance for wheeled vehicles and a new vehicle called the Stryker. Preparing to go to combat in the Garrison environment is strenuous, rigorous and trying, but at the end of the day, one knows it will be beneficial. “Once you are ‘in country’ and are called up on a high priority mission, the blood starts to flow,” Eric informs me. “Training takes over and preparation of gear and vehicles becomes subliminal. Nothing can prepare you for the inevitable events of combat, but training and will to survive will always prevail.”

While danger has subsided drastically since the early 2000s, the threat remains very real. Eric’s combat support and vehicle recovery team, in tandem with engineers and explosive ordnance disposal (EOD), encountered well over 100 Improvised Explosive Devices (IEDs) and numerous caches of homemade explosives (HMEs), of which insurgents have ample supply due to mines and bombs left by the Russians in the ’90s. They are low on ammunition, but they make up with HME ingredients. “In my experience, most of our soldiers were lost to an attack on our Forward Operating Base (FOB), rocket attack to a helicopter, or a booby-trapped ‘jungle’ with small (anti-personnel) IEDs,” Eric explained. Friendly fire is minimal due to diplomatic relations with our local national counterparts.

Despite months of training, it is impossible to completely prepare for the intensity of combat. The brain goes into a heightened state of awareness, far beyond what most of us experience. According to him, “The adrenaline is pumping and you are literally fighting for every second. Each decision has to be concise and wholehearted. In retrospect, the feeling of knowing you could die in a firefight, ambush, or IED field is exhilarating yet frightening at the same time. In war, there is no time for fear…only crucial decisions.”

When the combat tour is completed, decompression is the door to returning to a life with a healthy state of mind. As he explained, “The decompression process through the Army was three weeks of classes, medical check-ups, and psychological counseling. The after-effects took some time to settle in, but nightmares are vivid…noises can trigger emotions and memories. It all depends in the individual’s experience and duty position while deployed.” 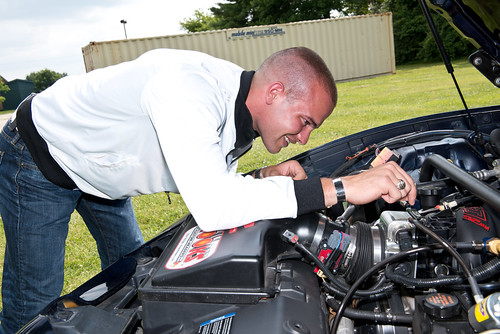 Eric Brattain working on his beloved Trans Am.

With campaign promises from years ago still waiting to be fulfilled, it is heartening to learn that U.S. involvement in Afghanistan is diminishing. Currently we have just over 30,000 troops on the ground compared to 200,000 during the flush. We anticipate all troops to be withdrawn by the end of 2014.

Many lessons are learned in combat that shape our perception and purpose for life. Eric adds, “Most importantly I learned to live life  and to NEVER take life for granted. My family has been HUGE supporters, and I know I had an amazing support group from the Traders Point Military Ministries. My friends who stuck with me during a very lonely and emotional time in my life will never be forgotten. Nor the camaraderie of my brothers and sisters whom I served with daily through blood, sweat and tears for 243 days.”

Eric would like us to respect our country, flag and soldiers throughout times of hardship. He explains, “Soldiers are merely following orders that are set in place to ultimately keep American citizens safe and untouched by enemies. I have gained a new respect for the United States flag and I will protect that icon with my life. Not every soldier needs a ‘thank you for your service.’ I would be grateful if Americans showed their pride in our country.”

“War is not easy. It is life changing. But it is an experience soldiers are willing to endure to defend our great nation, and we do it for YOU…so that civilians may live peacefully,” he summarized.

We want to remember to appreciate, honor, pray for and lift up ALL of our men and women still protecting freedom at home and abroad. We appreciate your service and dedication to make a difference in our world. And we will rejoice at your homecoming.