Dining at Home for Women in Need “Come on in! It’s good to see you,” Liz Qua says as she opens her front door and welcomes women into her home. “You can set your dish there on the island,” she continues as she nods in that direction. Liz is hosting a meeting of Dining for Women, a national organization that promotes economic sustainability, education, and medical care for women in poverty around the globe. A bountiful buffet appears in her kitchen as guests carry in colorful garden salads, fresh fruit and vegetable trays, warm homemade muffins, a spicy chicken and potato curry, and a specialty pie from a local bakery.

This is one of many Dining for Women dinners that Liz has hosted during the past two years. Encouraged by her sister in California, Liz launched the Zionsville chapter of Dining for Women in April 2012. Her sister participates in a San Jose chapter and has even served on the national governing board. Based on what she learned from her sister, Liz felt the program was worth bringing to Central Indiana. “We want all people to live with dignity, respect, and freedom from abuse,” Liz says. “Dining for Women is an easy way to help women around the world who face difficulties we can hardly imagine.”

Like other chapters around the country, this group meets for pitch-in dinners at a member’s home once a month. After sharing a meal, they learn about a particular need in a particular country and find out what Dining for Women is doing to address that need. When they leave for the evening, members have the opportunity to donate to the cause. Giving is discreet and entirely optional. Most women give approximately what they would have spent if they had gone out to eat.

“Pick one night a month and eat in, and all the money you would have spent at a restaurant goes to a cause,” says member Amy Langford. “I love the concept. It’s so simple and easy.” Amy joined the group shortly after moving to Indiana from Texas when she read about it in a local paper. She contacted Liz about joining and has participated ever since.

Close to 30 women have joined the Zionsville chapter, and 10 to 20 typically come to each meeting. As Susan Hyten says, “It’s not a requirement to be here every month. If you can only come twice a year, that’s great. Each meeting is an opportunity to learn and contribute.” Membership is still open, and women are encouraged to bring a friend.

As the group finishes eating, one of the women heads to the living room to set up a video. Everyone follows, sitting on the sofas and pulling up chairs to form a loose circle. Karen Dzurisin, who has volunteered to be the presenter this night, is about to introduce the charity of the month: the HOPE Foundation for Women and Children in Bangladesh.

The mood changes from convivial to concerned as Karen confides that reading about the women served by this foundation brought tears to her eyes. She explains that Dining for Women has selected this organization as the featured charity for May 2014. The foundation will receive $45,000 to support its work with needy women and children in Bangladesh. One of the special needs it will address is obstetric fistula, a medical condition resulting from obstructed labor. Women with this condition are often abandoned and left to live in isolation. The HOPE Foundation finds women suffering from this, educates them about what can be done, and provides them with medical care that can heal their bodies and allow them to reintegrate into society. Karen admits that it’s tough to hear their stories. Nonetheless, she likes participating in Dining for Women: “It lets me learn so much, increase my awareness, and lift these women up in prayer.” 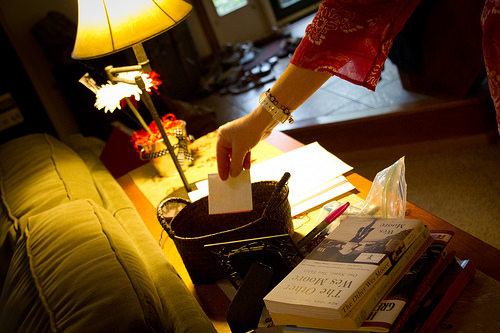 Before showing a short video about the foundation, Karen asks each woman to share what community means to her. Heartfelt stories reverberate as several women express how deeply they feel a sense of community in Zionsville. They tell stories of neighbors, churches, families, work settings, and volunteer groups that surround them with support. They talk about friendship, hardship, and walking through good times and bad times together. Some members are more private; a few are still seeking a true sense of connection. Most who have lived here a few years say how blessed they feel to be here.

Karen leads the discussion back to the topic for the evening by saying how rare the gift of community is for many of the women served by the HOPE Foundation. “I intentionally wanted to set the stage with hope and the blessings of community, because this video is hard to watch and it breaks my heart. But what Liz is doing and what we are doing as a group is great, because it offers hope and the possibility of community for them.”

Dining for Women began in 2003 when Marsha Wallace of Greenville, South Carolina, decided to have some friends over for dinner on her birthday. She asked them to bring a dish and donate the money they would have spent at a restaurant to needy women. She got the idea after reading an article about a group of social workers who had done the same thing. Cofounder Barbara Collins, a friend and neighbor of Marsha’s, worked with her to develop the idea. They established an official nonprofit organization a year later. During the following months, the group saw an explosion of growth as national media ran stories about the concept and its success.

Now, a little more than 10 years later, Dining for Women has hundreds of chapters all over the country and has raised more than $3.25 million. The Zionsville chapter, one of three in Indiana, has raised more than $6,000. As Hilary Clinton has said, “The efforts that Dining for Women have undertaken…all across the country over the past 10 years, provide a powerful example of how individual acts of giving, when aggregated, can make a deep and transformational impact.”

As important as the fundraising is, members attest that local meetings are about much more than money. Members open their hearts as they open their purses. Meetings provide opportunities to learn about the world, look poverty in the face, and realize that it’s possible to make a difference.

Some members, like Karen and Liz, accept a leadership role by volunteering to present information on the monthly grant winners. Cheryl Kussow led and hosted the June meeting. It focused on the Tanzania Nursing Scholarship Program, which will allow 25 young women in Tanzania to become registered nurses and registered midwives. Cheryl led the discussion of the connection between healthcare and education and showed a video of several young women in crisp pink dresses who explained how receiving a scholarship to attend nursing school is helping them grow in confidence, support their siblings and parents, and fill a critical need in their rural communities.

To further a sense of cultural connection, Dining for Women compiles recipes from the communities it serves. Before each meeting, Liz emails these recipes to the members. Invariably, a few adventurous cooks make some of these dishes and bring them to the meetings; Kathy Blake brought flavorful Tanzanian shrimp to the latest meeting.

Sometimes presenters plan games as a way to learn more about the geography and culture of the region receiving assistance. Amid laughter and friendly competition, the group played a Jeopardy-style game to learn about agricultural practices being taught to women in western Africa. For a program supporting a school in Afghanistan, members broke into teams and had a quick contest to see who could label the most countries on a blank map of the Middle East. “It was a bit humbling,” members admit with a smile. One of the hallmarks of Dining for Women is its grassroots nature. Just as individual chapters are small and localized, so are most of the organizations that receive grants. “Several of the charities they support are fairly new,” Lisa Donoho observes. “It’s neat that these groups can get a start. These grants help them get on their feet and off the ground.”

The maximum size of a Dining for Women grant is $45,000, usually payable over two years. Dozens of groups apply to the national board for funding. Twelve are selected each year. Grant recipients are not affiliated with any specific religious or political group. Countries highlighted in 2014, in addition to Bangladesh and Tanzania, include Vietnam, Kenya, Nepal, and the Dominican Republic.

Dining for Women focuses on teaching skills that women can use to improve their economic futures while assisting their local communities. As member Laura Yates says, “We’re not just giving them money, we’re teaching them to do things themselves. And as Liz has often told us, when you educate the women, you educate their sons and daughters, too.”