Circle of Lights: A Downtown Tradition 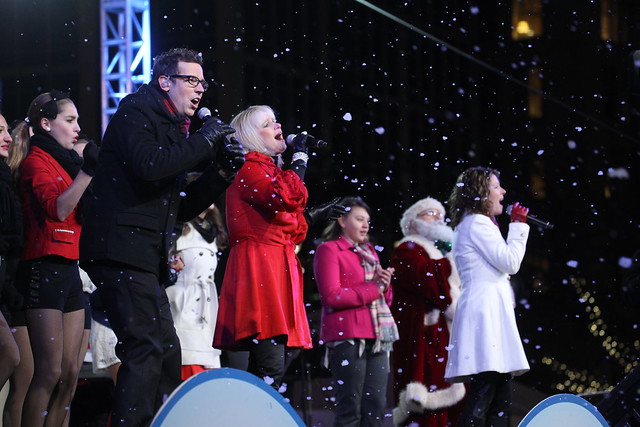 Magic and excitement will again permeate the air around Monument Circle, during one of Central Indiana’s most treasured holiday traditions, the Circle of Lights.

Presented by Quality Connection and the International Brotherhood of Electrical Workers (IBEW) #481, the 52nd Circle of Lights will kick off the holiday season, starting at 6 p.m. Friday, November 28, with a free family-oriented celebration.

From the Friday evening after Thanksgiving until early January, millions of spectators will take in the brilliant displays around Monument Circle.

In the middle stands the centerpiece, a 284 foot Christmas tree, standing lit as a symbol of peace and brotherhood. Every year I have stood in awe of that, and I have prayed a prayer of thanks for the teams of individuals who have contributed their time to give such joy. I’d like to tell you what just a small percentage of individuals have done behind the scenes for the Circle of Lights.

Decorations on the Monument have been a holiday tradition since 1945. World War II had just ended, and Christmas was nearing. Indianapolis architect Edward D. Pierre envisioned the Monument lit up in lights and decorations, standing as a symbol of peace and brotherhood. For the next 17 years, Christmas trees, giant candles and small toy maker shops brightened the Circle’s base, while elegant banners with phrases such as “Peace on Earth Good Will, Toward Men” clung to the Monument’s bottom section.

It wasn’t until 1962 Pierre’s vision of lights strung from the top of the Monument to its base became a reality. As I have mentioned, many people and organizations have played a role in designing, fabricating, installing and implementing the celebration décor. Initially, a group called the Indianapolis Christmas Committee, or the Indianapolis Holidays Committee, started the mission of what today is called the Circle of Lights. This mission today is the responsibility of Downtown Indy, Inc. 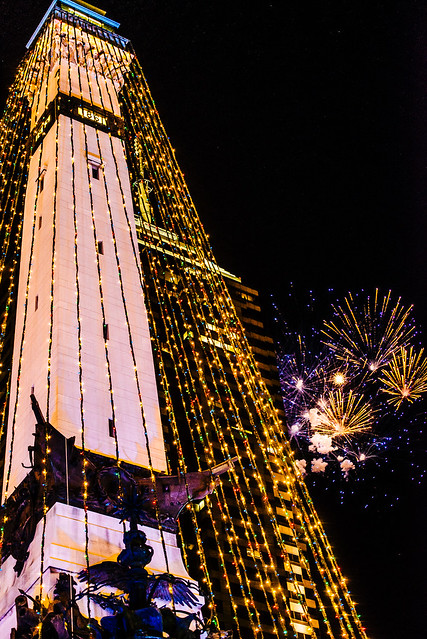 The union electricians of IBEW #481 have always been the organization to install and remove the décor. Two hundred of these volunteer electricians utilize more than six miles of electrical wire, 52 garland strands and 4,784 lights to produce Indiana’s holiday centerpiece.

In a chat with Julia Saltsgaver, Quality Connection Executive Director, she told me the electricians work one strand at a time hoisting up the most northern strand first. Then the most southern strand goes next. The project continues with this north-to-south rotation going in a counter-clockwise direction until completed. By handling the strands in this manner, great care is taken to protect the structure and integrity of the Indiana Soldiers’ and Sailors’ Monument in the transformation process.

“The contractors of Quality Connection and the IBEW #481 electrical workers are thrilled to provide their talent and skill to make sure that the Circle of Lights brings holiday joy for everyone,” Saltsgaver said.

The free celebration festivities start at 6 p.m. with the televised portion of the program running from 7-8 p.m. The Monument light-up will occur at approximately 7:50 p.m.

The celebration incorporates local acts from dancers to choral groups, to singers and musicians, all of whom were selected back in early October from a panel of judges in a format similar to the American Idol auditions.

For the third year in a row, the nine member band from Mount Pleasant Christian Church, led by Brian Tabor, has been selected as the house band. Based out of Greenwood, the group will rock the night away with Christmas tunes in a variety of styles, including R&B, pop and classic rock.

“We are honored to serve as the house band for Circle of Lights again this year. Our team is hard at work, preparing music that will help us ring in the season of Christmas,” said Tabor. “We are thrilled to be a part of such a special event in the life of our city. It has become one of the highlights of our year. If you have never been to the Circle of Lights, I encourage you to check it out. It is an unbelievable experience.”

Sitting down with Jennifer Hanson, Downtown Indy Senior Communication Director, I asked if the rumors were true.

“Yes,” she said, smiling. “We are also excited to have Indy’s own Josh Kaufman, 2014 winner of The Voice, to headline the Circle of Lights. Additionally, professional performers appearing at the Indianapolis Symphony Orchestra’s IPL Yuletide Celebration will take the stage. It’s going to be a spectacular show!”

A lucky child each year is selected from a coloring contest to help “flip the switch” with Indianapolis Mayor Greg Ballard. Nearing 7:50 p.m., the spectator’s anticipation builds. “What’s that sound?”
a little boy screams from the crowd.

It’s the jolly man himself! Santa!

And as the child, Santa and the Mayor
flip the switch, I’m sure I’ll hear Santa
saying, “Merry Christmas to all, and to
all a good night!”

“I love to visit the Circle of Lights every year. The splendor of Christmas shines so brightly on the faces of the children.” – Santa, 2013.