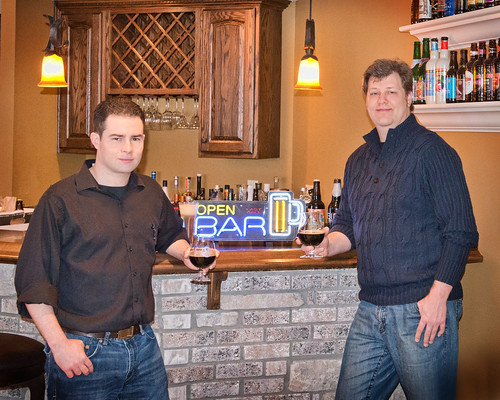 In the past five years, we’ve seen an explosion of craft beer in the state of Indiana. Although iconic brands such as Budweiser have lost market share to “upstarts” such as 3 Floyds, Sun King and Upland (the three largest producers of craft beer in Indiana), about 95 percent of beer sold in the state is not made in Indiana. Nevertheless, the amount and quality of Indiana beer is at an all-time high, and the growth rate shows no sign of abatement. In this month’s article, instead of looking as specific seasonal brews, we’ll take a closer look at a few local breweries that are doing a particularly fine job of brewing beer.

3 Floyds is the largest and best-known brewery in Indiana. In fact, and with no hyperbole, 3 Floyds is world-famous when it comes to craft beer. The brewery is noted for its use of hops. Sometimes I feel as though I could identify 3 Floyds beer based on smell alone, such is the brewery’s mastery of hops. Dreadnaught, which is a Double IPA, has been consistently rated as one of the finest of its kind for many years, and the recent addition of Zombie Dust has only solidified 3 Floyds’ position atop the pantheon of producers of hoppy beers. For any beer drinkers who think that wheat beers are a waste of time, Gumballhead is an explosion of hop flavor with relatively little bitterness.

Most of 3 Floyds’ production comes in the form of Alpha King, Robert the Bruce and Gumballhead, but it is the Dark Lord Russian Imperial Stout that puts this brewery on the world map. The beer is only available for purchase in bottles one day out of the year, and you have to go to the brewery to buy it. These days you even have to buy a ticket ahead of time to enter the property on Dark Lord Day, as it has come to be known. I have been to this event in years past when it was much smaller—say between 500 and 1,500 people. These days, attendance can reach well over 5,000.

Although Sun King brewed its first batch of beer in 2009, the brewery has enjoyed a meteoric rise and is now the second largest brewer in the state behind 3 Floyds (which has been around since 1996). Along with its production of great beer, Sun King’s success can be equally attributed to its use of social media. Sun King causes the average Joe (the kind of person who never cared much about beer as long as it was cold) to start considering not only where a beer is made but also its level of quality.

Sun King’s Sunlight Cream Ale is sure to satisfy the beer drinker who is looking for a BMC-like flavor profile but different, and the Osiris Pale Ale will quench the thirst of hopheads. Along with the aforementioned beers, Sun King’s year-round offerings include Wee Mac Scottish Ale and an IPA that changes with the seasons. The brewery produces many other beers on a rotating basis. One of the finest and best known of these is Grapefruit Jungle, a massive IPA that will be released sometime in the mid- to late summer.

Bier Brewery first opened in November 2010. Unlike a few other recently opened Indiana breweries, the consistency of Bier Brewery’s products hasn’t wavered since day one, and while the quality has always been high, it is still getting better with every batch. Bier is one of the state’s smallest breweries, but every ounce of beer made is turned over within approximately two weeks. This high turnover ensures that if you are drinking beer from Bier, generally speaking, you are drinking some of the freshest beer available anywhere.

Not every Bier product is available all of the time. Instead, beers are released on a somewhat seasonal and sometimes arbitrary basis. It’s kind of like a restaurant with a menu that changes every day. And whereas many breweries are best known for a handful of particular beers, Bier makes such a wide variety of extremely high-quality beers that it is difficult to focus on any two or three in particular as head and shoulders above the rest. However, if I could have only three of Bier’s offerings, I would suggest DFG Imperial IPA; Dred Brown, which is a Brown Porter; and any Saison currently available.

Disclaimer: If I were forced to make such a proclamation at gunpoint, and I could consider each and every beer made by any particular brewery, I would have to say that Bier Brewery is my favorite brewery in Indiana due to the unrivaled freshness of its beer and the high level of quality in each and every style.

Upland has been one of my favorite breweries for seven or eight years now. I’m one of those craft beer drinkers who eschews most wheat beers, but Upland Wheat Ale is one of the few for which I would willingly pay. It is refreshing, great with seafood and shellfish in particular, and often served with an orange (I strongly advise against this, by the way).

Upland has really differentiated itself from every other brewery in the state with its sour program. That’s right, I’m talking about sour beer. The brewery makes several fruited Lambics as well as a Flanders Red Ale called Gilgamesh, all of which must be reserved online via a lottery system. These sours are released on a rotating but somewhat regular basis, and it is these sour beers that have put Upland in the national spotlight of craft beer. The brewery recently launched a session IPA called Campside, which is perfect for those hopheads seeking to avoid the sometimes-crushing alcohol content of most IPAs.

Consumer warning: Although approximately 99.9 percent of all beer should be consumed while fresh, it is particularly important to drink a beer like Campside IPA as soon as possible—within a month-and-a-half of its bottling date. And hooray for Upland for putting bottling dates on its products!

BBC, or Bloomington Brewing Co., is known to some as “the other Bloomington brewery” and is unknown to many, but BBC is a favorite of mine. The Ruby Bloom Amber Ale is a smooth and malty amber ale with no hop bitterness. The Rooftop IPA is a perfectly balanced IPA, and BBC’s periodic releases of single hop pale ales are truly not to be missed! As a bartender who sees the dates on the kegs here at Patrick’s Kitchen, I can say that BBC (along with Bier Brewery and Sun King) is consistently some of the freshest draft beer around.

Everyone hold on to your wallets: The Taxman Brewing Co. has come to Bargersville! Taxman focuses on Belgian styles, but I’m sure that there will be a bit of meandering from the plan. The brewery offers five beers in its everyday lineup and will produce other beers as time and space allow. Both the Standard, which is a Belgian blonde ale, and the Exemption, which is a Belgian Triple, are great beers, and I look forward to tasting the Qualified, which is a Belgian Quadrupel. The Taxman tasting room and restaurant will open in July.

This article is too short to allow for a comprehensive description of every great beer in Indiana, but it is representative of my favorite breweries. As someone who has seen the inside of a few breweries and deals with purchasing and serving the product, I think that these breweries will be around for a while and will continue to improve the quality of their products. If you find yourself in a place that serves any of the products I have discussed, chances are there are others that you should try, too. Just remember: Life is too short to always drink the same beer.