A Noble Order Comes to Zionsville 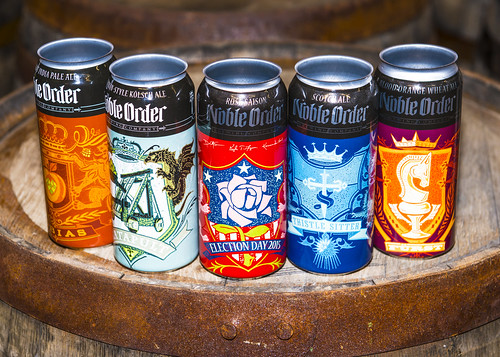 What began as a hobby for the owners of Noble Order Brewing Company is now an award-winning enterprise that has expanded its operations and will be opening its first off-site location, right here in Zionsville.

The Zionsville Magazine team took a field trip out to Richmond, Indiana, the birthplace of Noble Order Brewing Company and J & J Winery as a fact-finding mission, of course, and found ourselves in a craft beer and wine nirvana. Complete with a renovated farmhouse, water features, fermentation and other production related buildings, this location is the ideal place for weddings, festivals and other special events.

We met the owners Mike Miller, Melody Haist, Dr. Jeffrey Haist and their friend and brewmaster Richard Shoyer to discuss how it all began, what they produce and what people can look forward to upon the grand opening of their taproom in downtown Zionsville.

Dr. Jeffrey Haist is a cardiologist who practices predominantly in the Richmond, Hagerstown, Winchester and Oxford, Ohio areas. Haist’s love for gardening was nurtured throughout his childhood. He learned to garden at the Hilltop Garden Club in Bloomington, Indiana. He moved around a lot but always maintained a garden throughout his travels. He began his career as a winemaker like most people do, in his basement. Haist was interested in learning more about the science of winemaking and began extensive studies, eventually became degreed in Vinology. He and his wife Melody purchased their property in 2008 and opened the tasting room in 2009.

It has since become a popular venue for locals, tourists, weddings and the annual “Viking Festival.” The Haists maintain a couple acres of vineyard and 600 plants and produce a quarter of the grapes that are used to produce their wines.

“My neighbor who lives behind me and I decided that we wanted to grow a vineyard, and so we prepared the land and installed the growing posts,” Dr. Haist recalled and chuckled. “People who drove by probably thought that we were building Fort Knox. Making wine is a passion for me. Retirement is not a word in my vocabulary, but my profession in medicine does have a shelf life. Someday I will be too old and decrepit to be a doctor, but I’ll still be able to prune and stomp grapes.

“Seriously though, it is important to both Mel and I to be active, outdoors and around people. The winery and brewery will enable us to do these things. I once heard, ‘When you have a winery, you’re not just selling wine; you’re selling an experience.’ We want people to enjoy our wines and beers, but we want them to enjoy the experience, whether they are at our Richmond or Zionsville locations.” 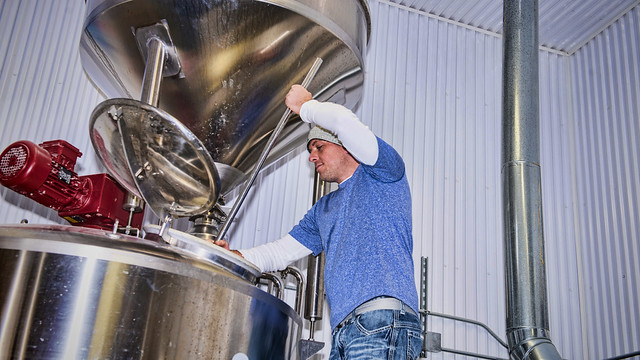 A retired high school English teacher, Mike Miller met the Haists and had been assisting them with various tasks on their property. Dr. Jeff Haist approached Miller with an idea to expand their production and open the state’s first winery and brewery facility. Miller’s passion for brewing had now become a entrepreneurial endeavor. He retired from teaching, teamed up with the Haists and brought Shoyer on as their brewmaster.

“I got into craft beer early in the mid-1980s at Grateful Dead shows and discovered pale ale before it was popular,” Miller said. “After a stint in the Army, I met Richard Shoyer and began brewing at his personal brewery. We were making beers that you just couldn’t buy in the local market yet. We started brewing in 2010 in a small space here on the property that was literally a chicken coop.”

With the help of the Richmond High School Trades class, they were able to build up and expand their on-site facilities. They went from a 1/2 barrel to a 15 barrel brewing system, producing more than just a growler of beer per batch to a little over 2,000 barrels a year.

Miller said that they will be expanding again due to the rise of demand and will be producing around 5,000 barrels this year.

Their taproom, which they anticipate opening to the public in early to mid-March 2016, will feature beers, meads and wines produced at their Richmond facility, and as a tribute to their expansion into Boone County, they will feature 16-17 beers that they regularly have on tap. In addition, they will be introducing their “all Boone County” beers that are made with local ingredients from Sugar Creek Malt Co. in Boone County. They are finishing production of their Indiana Pale Ale that they plan to have on tap soon after their opening. 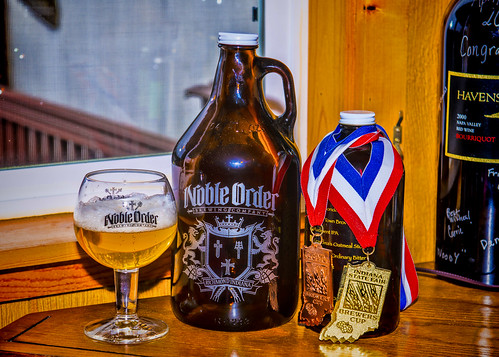 “We will bring in our Blood Orange Wheat ABV 5.6%, the beer that put us on the craft beer map,” Miller said. “Our customers will also be able to enjoy our seasonal Katapult ABV 5.1%, a light German Kölsch-style ale that is lagered for six weeks, and our Tobias Apricot IPA ABV 7.8%, a strong version of a traditional English IPA made with Noble English Hops and English yeast. With earthy and fruit flavors from the substantial hops used, this beer is not as dry and bitter as American IPAs. The addition of apricots adds a great blend of hops and fruit to make a clean and enjoyable beer. This is available year-round.”

When asked about the style of their craft beers, meads and porters, Miller explained the origin and philosophies of their brewing methods.

“We brew strictly European style beers,” he stated. “We stick to the traditional brewing methods of the originating countries. For example, we brew beers that are traditional in Germany like Kölschs, Oktoberfest and Dunkles. We brew traditional ales from England such as IPAs and others like the Russian Imperial stouts, Scottish ales, Belgium beers, French Farm House Saisons and wheat beers.

“We do put a twist on some of those. Our Blood Orange Wheat is a German wheat beer aged on blood oranges. Our Tobias is a traditional English IPA aged on apricots. Then there are some things that we adhere to the strict guidelines of the Reinheitsgrebot, the German purity law from 1516 that requires that beer made in Germany only contain three ingredients: water, barley and hops. (Yeast, unknown in 1516, was only added to the list of permissible ingredients in 1993.)

Miller told us that while they continue to expand their eastern Indiana/western Ohio territory, Zionsville was the location that “spoke to them” when searching for a place, closer in proximity to Indianapolis, for their taproom.

“Following the Sun King and Upland Brewing models, we sought input from their owners when we were looking at locations,” Miller said. “We attended the Whitestown Brew Fest in 2015 that was put on by IndianaOnTap.com. We fell in love with area. We met Ben Worrell, the Boone Bounty Economic Development Corporation Business Development Manager, and began looking for some places in Zionsville. We knew immediately that this was the right place.”

The Noble Order Taproom and its owners are community minded and believe in supporting other local businesses. They will continue to introduce themselves to the area restaurants and food-related businesses to encourage the patrons of their taproom to bring in their favorite foods while they sit in the warm and inviting ambiance that will be appointed with a blend of 10th and 11th century flare, a hint of Victorian and post-modern twists.

Their ultimate goal for their Zionsville location is to eventually expand the back area of the building and begin a “Home Brewers” Club. They would provide instruction and tips and share experiences with local hobbyists. They will also feature their members’ beers on tap.

They will provide local, acoustic music at their Zionsville taproom and will be open seven days a week.

For more information and to follow the Noble Order Brewing Company, visit nobleorderbrewing.com.