A trip down No. 17 Cherry Tree Lane

There are interviews in a journalist’s career that rank as a “bucket list” moment. I was recently privileged to check off one of those moments and share with my fellow theater fanatics a brief dialogue with the renowned English actor, novelist, film director and screenwriter Lord Julian Fellowes.

Prior to Fellowes’s international success with PBS’s Masterpiece Series “Downton Abby,” Fellowes won the hearts of theater-goers both in his home country and from across the pond when we wrote the book for the stage musical, “Mary Poppins.”

Based on the series of books written by P. L. Travers and the epic 1964 Disney movie, the show played on Broadway for over 2,500 performances. The musical “Mary Poppins” received nine Oliver and seven Tony Awards, including Best Musical. Original music and lyrics were created by Richard M. Sherman and Robert B. Sherman. George Stiles and Anthony Drewe composed new songs and additional lyrics. The musical was co-created by Cameron Mackintosh. Fellowes and his multi-award winning collaborators brought everyone’s favorite British nanny and family into the 21st century to be cherished and adored by the next generations.

Fellowes wrote the book in his typical brilliant manner that highlights the social stratification in Edwardian England. The musical debuted in London in 2004 and opened on Broadway in 2006. The Broadway production ran for over six years where it won the Tony Award for Best Set Design. The show has subsequently toured several countries and has been seen by over 11 million people.

I was curious as to why Lord Fellowes felt compelled to write this book and what sentimental meaning, if any, the story of the residents of Cherry Tree Lane and their mystical nanny had for him personally. He thoughtfully replied and then also explained the unique twists he included, specifically for the purposes of it being performed on stage.

“I was very pleased when I was approached to write the book for the new stage musical of ‘Mary Poppins,’” Fellowes stated. “The books had been great favorites of my childhood. They were given to me by my maiden aunt [do maiden aunts still exist, I wondered?], and she used to read to me in the bath, a vanished pleasure that haunts me still. I didn’t need to ask myself whether or not I wanted to do it. I knew I did.

“What I was not prepared for was that my wife, Emma, who is 15 years younger than me, did not even know there had been books. She thought the Disney film was the whole story. It was then that I realized the project, unusually, had two parents instead of one, and I would have to be true to both. This developed into a pattern of cross-fertilization where something in the books didn’t work for the stage [but] was the answer to be found in the film and vice versa? “For example, when we realized we could not duplicate the cartoon penguin dance in the park, I went back to the book and found Neleus, the statue that comes to life. This was Travers’s own comment on the father/son relationship, so much more satisfactory for Neleus than it was for Michael Banks. It meant we could deliver the film’s number, “It’s a Jolly Holiday,” by using one of the book’s narratives. I suppose, in the end, I just hope I have done both sources, the marvelous books and the wonderful film, justice.”

Scheduled to open in our own Civic Theatre at The Tarkington at the Center for the Performing Arts in Carmel, the staff, cast and crew will present their interpretation of this beloved musical this December. Songs will include timeless favorites such as
“Chim Chim Cher-ee,” “A Spoonful of Sugar” and “Supercalifragilisticexpialidocious.”

Patrons are guaranteed to be entertained by mind-blowing state-of-the-art effects and other incredible surprises. Catherine Dixon, Managing Director of the Booth Tarkington Civic Theatre explained, “Our production includes plenty of incredible special effects that have been made possible by one of our own board members, Tom Beeler. With Tom’s generosity and support of our production, we are able to entertain our audience with some exciting and first-class effects that we hope will leave our audience amazed and wanting more.”

Tickets are currently available through the Civic Theatre’s box office, and the performances are sure to enthrall its patrons with their spin on this classical, magical and “high-flying” tale. 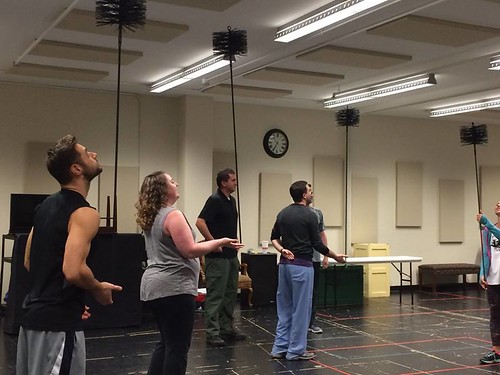