A friend of mine stopped in at my office, brandishing a two-week old Cuban cigar in her hand. I questioned where in the world had she been to have brought back the former contraband. She replied enthusiastically, “Cuba.” I promptly invited her to sit with me and share a synopsis of her adventures in this once surreptitious country.

Marla Misamore and her husband Gary are residents of Zionsville. Misamore is an accomplished photographer who toured Cuba on an educational visa with a group of 12 photographers this past October. Currently, American tourism visas are not permitted in the Republic of Cuba. Though, there are 15 other types of visas that will grant Americans and other countries access to the largest and most populous island in the Caribbean with over 11 million inhabitants.

Misamore and her colleagues spent 12 days on the island under the guidance of photographers Rad Drew and Sally Wolf. Drew and Wolf coordinate these incredible photography workshops that allow photographers, seasoned or otherwise, to take snapshots of intriguing places all over the world. The group of 12 flew from Miami, Florida, to Havana on a Swift Air flight (formerly Eastern Airlines).

“Since our visit was labeled as an ‘cultural and educational experience,’ we kept a tight schedule to be able to get to as many cultural sights as possible,” Misamore explained. “We had a sunrise shoot every morning at 6:30 a.m. Most evenings, we wouldn’t wrap up for dinner until around 9 p.m. We watched many performances from local ballets and dance troops that were absolutely beautiful. Ernest Hemingway kept a residence on the island and was loved by the Cuban people. His family has opened his home as a museum, which is a fantastic house to begin with. We saw his original boat and his favorite chair and typewriter.”

Misamore describes the people as being receptive and excited when Americans in particular come to visit their country. 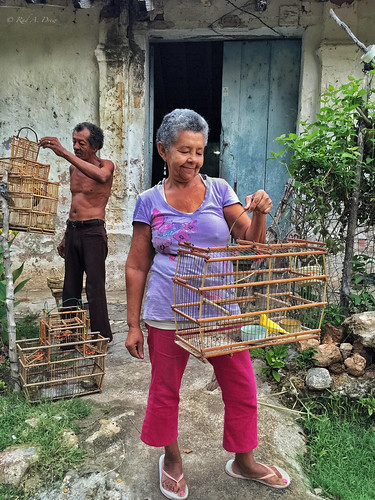 “The Cuban people want us there,” she said. “They love us. They are a happy people filled with culture, and there is music resonating all over the cities, all of the time. We went to an event one evening and enjoyed an evening of Latin dancing. During the day, we visited the local businesses and markets in the villages.

“I recall one employee diligently typing away on a non-electric typewriter. I asked if I could take her picture and respectfully paid her $1. The Cubans barter every day for items like toothpaste and other basic necessities. For the most part, they rely on the compensation from foreigners in exchange for their photographs.

“The markets were incredible to see. There were large pig heads sitting on tables with flies buzzing around and yet people make their purchases without any hesitation. We visited tobacco companies and watched the workers roll the tobacco. Everyone smokes in Cuba.”

Misamore described the dining options and local cuisine that she and her group experienced. Most Americans are conditioned to the notion that one dines outside of the hotel for a favorable dining experience. In Cuba, there are phenominal restaurants within the hotels. Breakfasts are typically served buffet style all over Cuba.

Dinner meals, which if more elaborate, are served from private residences or private restaurants and tend to average between $30 to $40 per person. Misamore noted that the seafood and any fruit or vegetables that you can peel are generally a safe bet when experimenting with the local cuisine. In lieu of a Dunkin Donuts or Starbucks, she praised the quality of the local coffee brewers.

Regarding transportation, Misamore describes the scene as being frozen in 1960. Most of the cars and taxis were produced in Detroit more than six decades ago with the exception of government officials and a small percentage of the population who drive modern Kia vehicles. There is a surprisingly significant Chinese population in Cuba in an area dubbed “China Town” that sits in the middle of Havana. 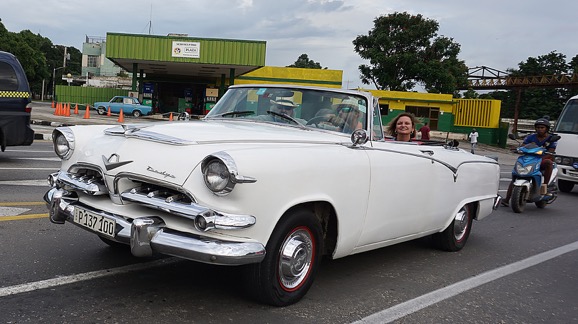 Misamore will likely be returning to Cuba with Drew, Wolf and others in March 2016.

“Reflecting back upon this trip, I am really looking forward to going back,” Misamore said. “I have to say I thought that I am so glad to live in America. Two weeks in Cuba is amazing, but I knew that eventually I would be able to go back home. Just like Dorothy said, ’There’s no place like home.’”

The group was invited to visit and tour areas of Havana that are otherwise unknown to regular visitors by Cuba’s most celebrated photographer, Ramses Batista. They were invited to his studio and walked on foot with Batista to capture a slew of breathtaking and rare photos. They also enjoyed lunch at Playa Giron (Bay of Pigs), visited an old Sugar Mill and the boxing gym, “Gym Kid Chocolate,” named after Cuba’s most recognized boxer.

“Roaming the streets of Havana and Trinidad, we captured photographic images of the ‘real’ Cuba,” photographer Sally Wolf stated. “The architecture, the arts, the cars, the commerce and of course the people. I look forward to the day when Cuba will be open to the U.S., and trade will improve their economy and their lives; however, Cuba today is so romantic of days gone by. Now is the time to see the country and meet the wonderful people. I can’t wait to return.” 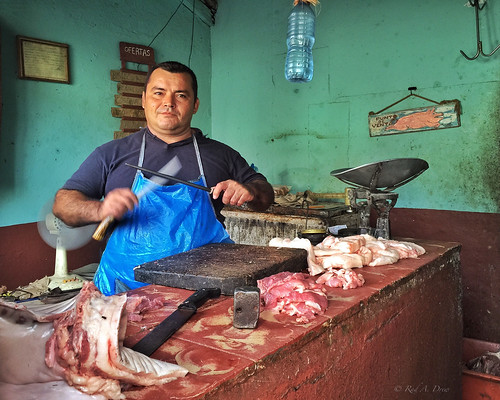 “The Cuban people are amazing,” Daugherty exclaimed. “One would expect them to blame Americans for 50 years of deprivation. Instead, they often applaud when told you are from the United States. They separate government policies from the people. It’s best to look beyond the decaying old buildings and look the Cuban people in the eye wearing a smile.”

One of the two group leaders, Rad Drew, an Indianapolis resident, has visited Cuba on multiple trips.

“I lead tours of photographers to fun locations around the world,” Drew said. “I first visited Cuba in 2013 as part of a photography group for the purpose of interacting with the local people, taking photographs and learning about Cuba. This year, Sally Wolf and I put our own group together with the primary purpose to conduct photography workshops mostly between Havana and Trinidad. We wanted our photographers to go to places where they could get incredible photographs and offer them assistance with composition or maximizing their equipment.

“I prefer to venture out into the cathedral squares in the early hours of the morning where there is beautiful architecture and the buildings are quite old. The only people that are out are the locals sweeping their streets or heading to work or school. By 2 p.m., the streets and squares are filled with tourists.

“When we go as a group, we like to engage the people who we want to photograph and make it an interaction as opposed to a transaction. We have more meaningful experiences that way. Now we do bring items to exchange that are typically items that we take for granted. Due to the trade embargo with the United States, items such as hand lotion, soap, toothpaste and elastic hair ties for the ladies and girls are expensive items for the Cuban people. It is also our gesture of appreciation for letting us photograph them.”
The next trip to Cuba is planned for March 8-17, 2016. For more information and questions regarding Sally Wolf and Rad Drew tours and for Rad Drew’s Cuba exhibits and presentations, please contact Rad Drew Photography, LLC, 317-506-9901, [email protected] or www.RadDrewPhotography.com.