The first issue was grabbing the headlines, dominating the conversations and spurring the debates. Should the Colts use their No. 1 draft selection to take Tennessee quarterback Peyton Manning? Or should the franchise creep out on the diving board and perhaps take a bigger risk with a potential huge upside? Would Irsay and Polian snap up strong-armed Ryan Leaf with that franchise make-or-break top draft pick?

History loudly tells the answer. The Colts went the safer route and scored a touchdown when they selected Manning. There is no need to retell the different stories that transpired between the two quarterbacks.

But there was another question haunting Irsay and Ward, his chief business aide: What should the Colts do with their expiring radio and television contracts? Do they take the safe route and again sell off the broadcasting and television rights to local entities (WIBC in radio and WTTV in football)? Or do they roll the dice, trash the guarantee payments and assume the upside or downside and sell their own advertising in the small marketplace that could lose its franchise to Los Angeles or other aspiring rivals?

This time, Irsay and Ward chose to gamble. They walked away from the financial guarantees and started selling their own commercial time. Starting in 1998, the Colts basically conformed into a radio/television/billboard company. 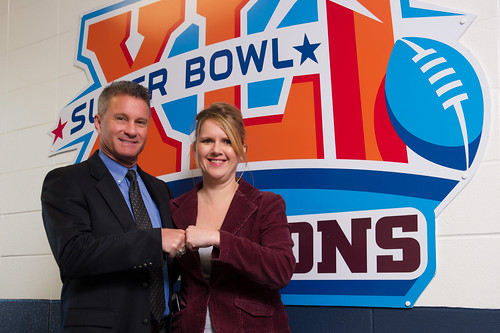 Sixteen years later, the business decision from Irsay and Ward has echoed with the same success as the selection of Manning. Thanks to Zionsville resident Jay Souers and his sales team, the Colts have scored major victories on the marketing front. Consider:

• Sponsorship sales (Lucas Oil Stadium signage; website sales; radio and television advertising; and promotional activities) have exploded upwards. Once near the bottom of the NFL in broadcast revenues, the gross figures have soared under Souers et al. Though the franchise doesn’t release revenue figures, it is very likely the franchise has increased sponsorship sales income by five to six times since 1997.

• Inventory and coverage of Colts products have risen from basically only game coverage in 1997 to a staggering nine hours on game day, weekday in-season updates on Emmis Communication properties and a year-round weekly one-hour radio show.

• The Colts radio network has expanded from only 20 stations to over 50.

• With their own studio at West 56th Street (sponsored, of course, by Indiana Farm Bureau), the Colts produce two weekly television shows during the season. One extends into the other 32 weeks of a year.

• And, naturally, there is the continuing sellout of home games that is authored by both the sponsorship and ticket selling teams. Since 1998, the club has failed to sellout only one home game.

Indeed, the same passion produced by the Colts on Sunday afternoons has carried into the sales world according to Souers, the teams Senior Vice President of Sponsorship.

“We have a great group [of marketing/sales executives] that plays with passion for the horseshoe,” praised Souers, who enlists a vice-president of sales, six sales representatives, four coordinators and a chief administrative assistant.

“I truly believe we have the most complex media sales job in the city,” said Souers. “Our staff sells and has to have a working knowledge of radio, television, print, community relations programs, promotional event sponsorships, ticket sales, electronic video boards and video and static billboards.”

That wide array of knowledge and strategy by Souers and his team represents a dramatic shift for the Indiana University graduate whose first position was cold calling for Indianapolis Life.

“After a year, I was a little tired of the phone slamming in my ear,” he said.

Following a traveling job as a representative for a fan belt and radiator hose company, Souers and a friend took the plunge into small business. They started an ice cream company at the City Market.

“The bright spot was getting to serve Wayne Gretzky [then an 18-year-old with the Indianapolis Racers] ice cream when he played at Market Square Arena,” Souers said. “That was the only bright spot as we lost money quickly.”

“I had a staff of two sales people and an assistant,” he said. “But I used every trick that I had learned and we actually doubled the attendance the first year and showed a positive cash flow. Unfortunately, the owner was not willing to reinvest in the park and he pulled the profits. The safety
of the guests started to be a problem.” 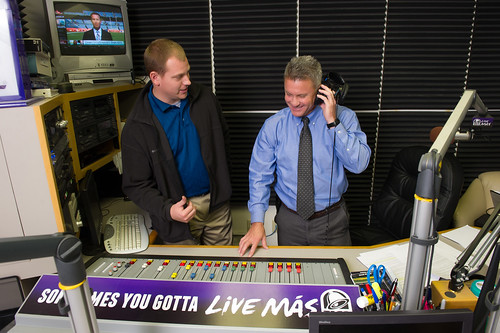 Following that stint, Souers turned to a familiar face at home and in the community. His father, Bernie, was the sports manager at WTTV, home of Indiana, Purdue and the Pacers. The elder Souers worked at WTTV for 44 years before retiring.

“It was great fun getting to work with dad before he retired,” said Souers, whose father died last summer. “He passed so much wisdom to me that ultimately helped me so much in my job as a manager and in life. I was content at WTTV, but my dad left, and an opportunity came along that I could not pass up.”

That opportunity was the Colts, who were studying ways to improve their lagging sales. Ward, another Zionsville resident, plotted the strategy of revamping his sponsorship sales team.

Souers was offered the opportunity to join the NFL. But there was no Icky Shuffle or touchdown celebration dance just yet on the home front. Souers and his wife, Julie, had triplets who were 5 years old and his new job came at a $30,000 decrease in salary.

“I came home to tell Julie that I wanted to leave my secure job at WTTV, take a paycut and start working for the Colts who were in the middle of a media firestorm about moving to Los Angeles,” he said.

Eventually, Souers got his decision clinched after meeting one-on-one with Irsay and learning that there were no moving vans booked from Indianapolis to Los Angeles. In fact, with a new lease signed for the RCA Dome in November 1997, the Colts aggressively pursued additional fronts in the revenue battles that stared at a small-market team.

But his story has a happy ending. Coinciding with back-to-back Super Bowl appearances, numerous division titles and countless 12-win seasons, the Souers gang have scripted win after win in the sales arena. They secured Founding Partners for a new stadium; carved out a $120 million naming rights deal with Lucas Oil for the stadium; and have collected long-term partnerships with Budweiser, Coca-Cola, Huntington Bank, H.H. Gregg, Hoosier Lottery, Toyota, Indiana Health and a bevy of other title sponsors such as Vectren (Radio Network), Advantage Health (a club level sponsor) and Training Camp (Tire Barn).

Of course, Souers has witnessed some changes at home and in the office. He sees a new generation taking over in life. His triplets– sons Kody and Kol and daughter Amy– are 23 and involved in sales and marketing activities in Indianapolis. And another line of Irsays, Jim’s three daughters, are now helping steer the ship.

But a couple of items haven’t changed much in the last 16 years. The Colts are still winning, and the sales team is still rolling also.